I’ve stood only once on The Pinnacles of the Dan River (topo). And it was perhaps the only place I’ve been where you could underhand toss a stone and have it fall a thousand feet before it landed—in this case, in the tiny thread of the Dan River headwaters far below. I can’t recall much of that hike except that it was very botanically rich. We lived in Wytheville at the time, and I was in unfamiliar territory; now, this is not that far from home, and traveling down the parkway as we often do, as the crow flies, we’re only a few miles from this striking landform. 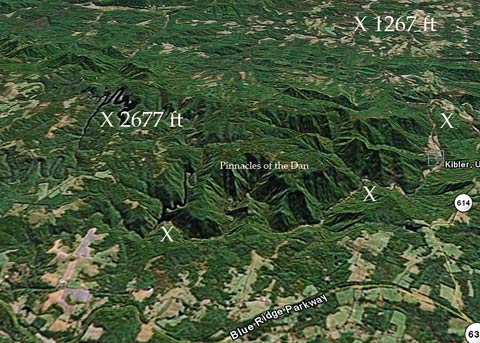 Take a look at the Google Map screenshot and follow the winding path of the Dan near it’s westernmost source in Patrick County. Rather than taking the shortest path south into the piedmont, it courses south and for reasons lost to geological history, cutting its way deep into the mountains before turning south. Most of the rivers drop in elevation has already happened by the time it reaches the Pinnacles (hence the 1000 foot precipice) though the surrounding land elevation stands in great relief, Mountains against NC Piedmont through which the rest of its journey carries it. (Google Earth: find Kibler, VA) 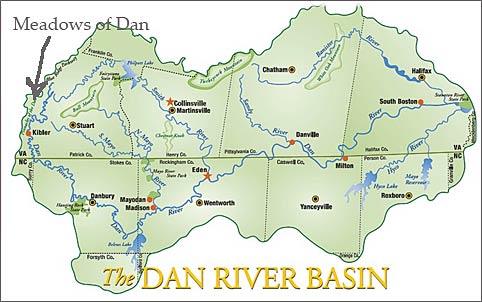 This, of course, is a river system, not a single stream, and encompasses some 3300 square miles of land drained by tributaries of the Dan that I’ve never heard of: Mayo, Smith, Sandy, Bannister and Hyde Rivers, each with their own pattern of feeder creeks, springs and branches draining swamps, shopping center parking lots, pig farms, and forest before the common stream of the Dan joins the Roanoke River.

And so any drop of rain that falls in Goose Creek will eventually mingle with a drop from the Pinnacles, or Mayo or countless named and nameless creeks of the Dan and yet other feeder rivers before it all flows into the briney Albemarle Sound.

Some would consider the time I spent yesterday looking at maps a foolish waste of time. But I have now a better sense of my place in the world. I know the lie of the land in a deeper way. And when it rains again (soon, we hope) I’ll imagine two drops, one starting in Nameless Creek and the other at Pinnacles, meeting finally before merging in the Atlantic. That daydream seems to me worth the moments spent exploring this place we all call home.