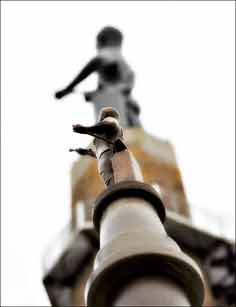 I don’t think I ever seriously considered not driving eight hours to my forty-fifth high school reunion in Alabama this month. But, in spite of my early determination to go, I struggled with misgivings and ambivalence that did not haunt me before my tenth reunion.

I fantasized the Friday night event. I saw me walking into a vast throng of people in disguise–with funny wigs and body padding, wearing almost-familiar caricature-masks of who they had been. The best of high school friends might have become unrecognizable strangers to each other.

And could any of the stories have survived for so long? What would we have to say to each other? Surely, by now, the common bond of experience would have faded to featureless days over four blurred years, out of which all we could remember was being held in place by the same plastered walls, and perhaps a few jumbled words of the alma mater.

Now, having just returned from my 45th, I’m glad I went. Those who also shared my secret concerns agreed: while you can’t go back, together, we could fleetingly resurrect fragments of our times.

But in this back-of-the-book chapter of our lives, it takes a village to raise a memory, and communal story-telling was common at the Friday event. What one had forgotten or not known, the other knew and remembered. Between a half-dozen of us, we could weave a tapestry of “truth” that was close enough, a tale much richer than any one person’s version alone.

Thankfully, the lapel-pinned high-school annual picture depicted who these strangers had been. But inside that morphed chassis, more than I would have thought, we’d not changed all that much, after all. We were still who, if not how, we had been.

Against the relentless flow of time, mannerism and bearing, attitude, temperament and essential character form the anchored rock in the river, a “who-ness” that doesn’t move very much. And this reunion reminded me that it was the foundational years of youth, the high-school years, when much of our essential core was set in place.

These classmates were the major and minor characters in my formative, evolving narrative of personhood, and I was part of theirs. This reunion gave us a brief chance to thumb back to those early pages that set character and plot, the common switching yard from which our journeys began. Over 45 years, we had scattered towards the multitudes of unpredictable and often surprising destinations we briefly described to each other at the reunion.

We agreed: Our early academic foundations in those times were solid. We had teachers who were excellent, and we spoke of them with a certain reverence; and we had some who were just kooky, and provided fodder almost a half-century later for roasting and impersonations while walking the high-school corridors, as about 50 of us did on the Saturday tour.

We celebrated our having been at Woodlawn High during less turbulent and more predictable times, just as the issues of race were reaching the flash point in Birmingham. We almost all had stable family lives then, in an age before divorce became the norm.

The music of our era was embedded forever in our character, spanning MoTown, the British Invasion, and rock-and-roll evolving from Buddy Holly to the Stones. As the DJ held them up acoustically for us to relive on Saturday, we couldn’t imagine that our grandchildren would look back on hip-hop, rap and heavy metal with the same reverence or nostalgia.

Were there disappointments, looking back on the reunion weekend? Certainly. It was not possible to know or to be known in a quick hello in a crowded, noisy room. The script of most encounters could easily be scribbled on the back of a business card. Driving through old neighborhoods was not to live in them again. And yet, there were some meaningful moments, and we were changed.

So was it worth the effort? To be sure, even with the 100 degree heat. And when it comes time to plan for the 50th, will I go? I’ll probably have to think about it all over again.

Seasons change with the scenery;
Weaving time in a tapestry
Won’t you stop and remember me
At any convenient time?

2 thoughts on “Time in a Tapestry: The 45th Reunion”