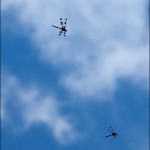 I stepped out the back door yesterday mid-afternoon and as I typically do this time of year, I scanned the invisible column of space that rises in a hundred-foot-wide cylinder of the clearing in which our house sits nestled among the maples. There might be a boiling cauldron of migrating hawks (though if so, they’d be somewhat off-course for the thermals over the Blue Ridge Escarpment ten miles to our south.)

To my amazement, the invisible tube that is our air-space held hundreds of dragonflies–an almost-frightening aerial dog-fight of substantial X-wing fighters feasting on the recent hatch of what we call gnats for want of a better taxonomic epithet.

There were so many, I couldn’t miss getting at least a few in focus, so I ran inside to find my camera on the couch, just inside the door. Back outside, I commenced to set my shutter speed, ISO and such for the shoot. And in the data-viewer on top of the Nikon, the dreaded “E” for empty stopped me in my tracks. There as no card inside to accept the image I hoped to take.

It seems I have lost my memory.

In more than ten years of using Compact Flash for my lineage of exactly three digital cameras (four if you count the pocket Canon that is officially Ann’s) I have never even so much as momentarily misplaced the tiny cards: they are in the reader at the computer or they are in the camera they belong in–no in-between.

Now, my 8GB card is in-between, but not in any logical and conspicuous and safe temporary space that would befit its importance and reflect my general care in such matters.

And I have to wonder about myself with some considerable concern, as those of a certain age tend to do, when a younger person would be more forgiving and dismissive of such screw-ups as a freak circumstance of events ending in an oh-crap moment, and move on.

But this inexplicable loss of memory has really gotten to me, both because of the photographic inconvenience and unnecessary additional replacement expense and more so, for its being a new kind of error of intention and focus.

I can buy another compact flash card. If before shopping, I can only remember the pants.

3 Comments on “Losing It”