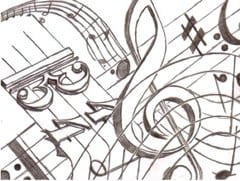 A friend of mine (Michael Abraham) is writing a book about people and places along the Crooked Road. On one of his interview excursions he spoke to a miner in far Western Virginia. “Music’s nice and all, but it really don’t amount to nothing. It’s just fluff.” On a similar note, one language expert has recently called music “auditory cheesecake, a delightful drug that could vanish with no harm to the species.” And I disagree.

A rebuttal could fill books, and in fact, has. But my thoughts about the subject here will be brief, and reinforced by two recent facts: the brain can now be watched diagnostically to reveal the extent and location of brain areas active when we listen to or play music, or rehearse it in our heads.

The second new reality that throws music into a different light (or to a different pitch might be a more appropriate word) is the understanding contained in the word neuroplasticity: the brain is capable of far more change and adaptation than we have believed. And music, not surprisingly, is one of the influences that can change a brain.

I’d like to briefly suggest just a few of the fascinating functions of music, which I offer to counter the cheesecake verdict.

I have a high school reunion in June. I see on the web page the faces of those I should remember, but I can’t quite recover the sense of who we were to each other. Then I listen to the music of our times (Beatles, Stones, Bob Dylan, the Moody Blues) and while the music may not help me remember the name of an old girlfriend, it builds an emotional bridge to those times with these very people. The music of our times is like a book binding that holds together the chapters of our lives. That’s not fluff. When I’m 64, I’ll still hear the music.

Music and the Changeable Brain

Our grandson has a birth-damaged brain, and what he will be capable of, physically and intellectually, is unknown. But he loves music. It reaches him, and this is encouraging. Discoveries of the brain’s ability to change over time (the neuroplasticity I mentioned) have recently abolished many of our former certainties about limits to a brain’s ability to repair, recover and re-allocate functions around injured regions of the organ.

Neurologist Oliver Sacks’ 2007 book, Musicophilia, is a fascinating study of the therapeutic role of music. Parkinson’s sufferers can be released from their rigidity and inability to initiate movement. Tourette’s Syndrome sufferers playing percussion together lose their impulsive tics and outbursts. Memory, music and emotions all activate the same regions of the brain, so Alzheimer’s sufferers, with music, find lost memories and experience genuine pleasure.

Another recent book called “The Brain That Changes Itself” shares a variety of cases of human brains injured by events like the strokes our grandson suffered at birth. The afflicted show abilities and behaviors altered in amazing ways by experience, by determination and merely by “taking thought.” Those changes can be confirmed by new ways to see the brain “light up” as it thinks and perceives. “Changing your mind” has taken on a vastly new meaning and potential. Our family hopes that music will have a reorganizing effect on our grandson’s brain and mind in its quest to think, feel, remember, move and sing.

Sophisticated brain scanners are not necessary to witness the energy of music on those under its spell. Just watch an animated Friday night crowd listening to Sally Ann or Shady Grove. Music is to dance as a warm wind is to the lifting leaves of a forest. Since the very earliest human history, music’s power and permanence throughout all civilizations may be because of its ability to bind us together in motion, emotion and common identity..

I think about this when I consider that many southwest Virginia communities–with Floyd as a shining example–are known for their ongoing celebration of music across a wide range of genres. Much of it is drawn from Appalachian roots, which were handed down in turn from our settler-ancestors and the reels, chants and ballads they brought with them from Germany and Africa, Scotland, Ireland and elsewhere. Our “traditional” music is a kind of cultural memory we cultivate each time we play the old-time tunes.

So a night of music in the heart of town or a house concert from a living room or single banjo ringing out in the night air from a front porch represents one of the most human things we do. Making music is a healing enterprise for our heads and our hearts, our homes and humanity that we joyfully create for good. We are bound together by the beat of the music of our lives.

And for those who can happily live without music, let them eat cheesecake! [Further Reading]

3 thoughts on “Music: the Binding of Our Lives Together”