The way things are can take on illusion of permanence. All permanence within nature is a fiction.

I remember as a very young man lying on my back in the cool shade of a sandstone ledge , its massive brow Â sheltering me exactly as it would have another man ten thousand years before. Â I took comfort in its stony immutability.

I held that thought as the shadows lengthened that summer afternoon, hands clasped behind my head,Â until a grain of sand fell on my cheek; then another. And with those few grains of mountain on my skin, the illusion of permanenceÂ ended.

Those bits of sand made their way to an ocean beach asÂ the massive ledge disappeared, bits of it falling through my now –the constricted neck of the hourglass–whileÂ time, passing,Â made the lie ofÂ forever.

That lesson was made more firm when we stood recently on what Katrina left–theÂ floor of the sleeping porch and all that remained of my wife’s home place–a forever part of her growing up. 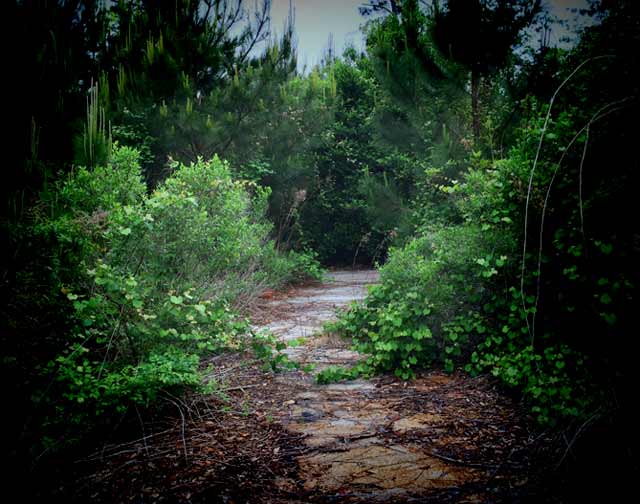 And standing amidst the nothing of what had once been everything– just thenÂ the fiction of my own forever placesÂ touched my cheek.

This place on the creek so central to our narrow now will not persist indefinitely.

A storm, a fire, or simple neglect will, in an hour or a century, bring to an end all resemblance of our so-familiar every-day footprintÂ of our less-than-eternal home.

A short bit of standing chimney in the tangle of vines and saplings may mark out placeÂ for a time, but that too will give way to grains of sand. And Goose Creek will carry away our firmamentÂ to the sea.

And so it goes.