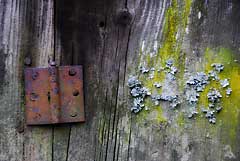 “Rust Never Sleeps” is the name of a Neil Young album I’d never heard of from the late 70s. But I’ve embraced the phrase, because it describes how the world works–or better, how it breaks, as a natural property called entropy. And I’m discovering, since leaving the workplace, that more things break than when I was getting feedback about my physical self from others.

First, in the absence of access to scales I’d pass in the clinic a dozen times a week, I discovered to my horror, what with my hand-related office visits lately, that I’d put on an alarming number of pounds for a card-carrying skinny guy. What you don’t know can bloat you.

So I promptly ordered a set of digital bathroom scales. And granted, the medical office weight was with clothes-less-shoes, but I’m down about 10 pounds now and within about a pound of my target weight of 175. Keeping it consistently there is the challenge, once I meet that goal.

And worse, it’s as much a matter of abdominal girth as it is weight. And a return to the 32″ belt notch most worn on my oldest belts is not likely to be a threat, ever again. I was a physical therapist. I know what needs to be done. I hate ab exercises, but losing a belly-inch will require tough self-love at least until the new year.

Secondly, mothers will tell you what your enemies won’t. “You’re getting a turkey neck” I think is the way she lovingly stated it. I was not shocked. I see pictures of myself in public places or from speaking venues, and want to tell myself to do a chin tuck and pull my ears back over my shoulders. But again, without the clinic mirrors and the peer pressure of posture-aware co-workers, entropy has done its work.

So, even after being an ergonomic-oriented therapist for years, I took advice from this NY Times article called Sit Up Straight: Your Back Thanks You. I’m almost sure the advice used to be to have sitting posture such that the top of your monitor was at eye level. This article recommends eyes at mid-monitor, so I just chucked my 23″ screen up onto a chunk of treated 6×6.

It seems awkward, but I can tell that this elevated view will help me maintain more cervical extension with eyes forward rather than down. I’ll give myself at least three weeks with the new attempt to thwart this particular “rust” of personal deterioration. I’ll let you know how it goes.

2 thoughts on “No House of Mirrors”