Vanity, vanity. All is vanity. So says the watcher in Ecclesiastes. What appears permanent is only so, briefly.

Our forever notion of things–mountains, marriages, health, home–can wither slowly like grass in the summer heat or be burned up in an instant conflagration before our eyes. Â A fine knife-edged balance exists between is and was, a constant tension proneÂ to tip–in that direction only–in a single heartbeat. Such is life.

She had been back to the site of the old home place before this recent trip back to the gulf coast. I had not. I am the more “romantic” of the two of us, and so become attached, by effort and intention, to all the particular heres and nows of a short lifetime, with their attendant portents, smells, feelings, visions, ghosts.

We made our way in the car down “the lane” to the home place on Biloxi Bay that she knew far longer and better than I.

My first memory of the place goes back to the Â time I drove down from Birmingham the summer after we met at Auburn. We suspected even then that there might be a forever relationship in our future . We sat crosslegged in the sandy lawn and talked frankly in the tepid dark under the arching live oaks between the house and the marsh grass along the night-lapping shore. Even she remembers that uncommonly serious talk about our future. I remember the shirt I wore.

We parked the car when the neglected sandy driveway became a too-narrow overgrown path. We tried to orient to what once had been to our right and left, now obscured by unkempt azaleas, wax myrtles, and a hundred other forgotten salt-tolerant shrubs, herbs and trees I used to know so well from our many visits there since 1968. 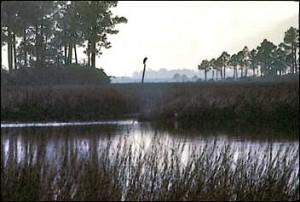 We searched for what Hurricane Katrina left of the house.Â  There was little to find–only a relatively clear area we could see in the canopy ahead, a slight thinning in the wasteland of young forest that had reclaimed all former efforts at order of open spaces.

The “clearing” turned out to beÂ the scoured surface of the old back porch that extended the widthÂ of the place, two bedroom windows forming one wall–an addition to the house that was addedÂ long before we were married. I slept out there as visiting suitor, and once conspired to climb through the window into one of the bedrooms where the ceiling fan wafted the curtains my way, an obvious invitationÂ to climb on in. She closed the window and locked it.

The house her family built in the early fifties had survived Hurricane Camille in 1969. By then we were engaged. After that superstorm, I did not know if she was alive for almost three weeks til the phone system was finally repaired. Not knowing was torment.

The house foundation stood 21 feet above normal tide. Camille blew boats to butt the foundation in the storm surge, but the wallsÂ held together with my wife’s family inside. It did not fare as well to the forces ofÂ Katrina. None of her family were living there by then. The loss still feels like an injury fresh for me, a chronic ache for others who have knownÂ it for years now.

We stood on the old porch, avoiding the blackberry canes that now arched in from all sides. The roll-top desk was here. The woodstove went over there. Remember? Always there were fishing rods stacked in that corner and columnsÂ of boxed canning jars in another.

Dark roughÂ bricks scattered in the weeds must have been from the chimney, newer red bricks from the foundation. Bits of asbestos siding–a pale and familiar green–and formica from the kitchen cabinets were the only fragments of what had been a forever place, once upon a time.

And some distance beyond the footprint of the disappeared house stoodÂ  the live oaks where Ann and I sat and considered our future, as if life’sÂ tide and wind, drought and famine, were forces we could know or control. We shared our hope. They say it floats. For a time, in our vain notions, we live as if we can count on the earth to hold us up and sustain us just so forever. And for a time, it will. Such is life.