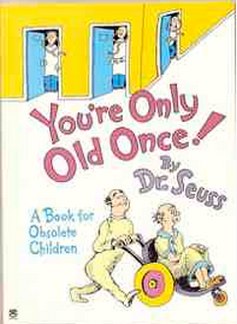 Dr. Seuss published You’re Only Old Once in 1986, on his 82nd birthday. At the time, due to illness, he complained of having a social life consisting entirely of doctors. You can see and feel his amused disdain throughout the book. He channeled his impatience, angst and disgust with healthcare towards our amusement. What a gentleman.

I don’t think I had seen this book that now sits on my desk, even though we must have bought or been given it soon after it was published. The grand daughters had it down off the upstairs bookcase over the brief weekend of their visit. I read every page this morning after Ann left for work. It produces more wry grimaces than smiles for the antique readers.

Our son would have been about 8 years old the year the book came out. Ann did most of the bedtime reading in those days, so she might have more recollection of the tale–of an elderly man confronting the healthcare system, in the Golden Years Clinic on Century Square for Spleen Readjustment and Muffler Repair.

I especially appreciated the subtitle of the book…”for Obsolete Children.” Seuss was most certainly tonguing his cheek with that one. By that time, even though famous and successful, he must have been feeling marginalized and powerless against the relentless march of time and age. Even so, he retained his wit, his wits and his joy of life, inasmuch as such is possible while being ogled by the Oglers.

Funny. All of my friends, I think, are former children, who like the hero of the book, are, more or less, in pretty good shape for the shape we’re in. And even life at the margins is better than some of the alternatives, after all.