↓ Skip to Main Content
Home › Reflections › So Where Has This Year Taken Us?

So Where Has This Year Taken Us? 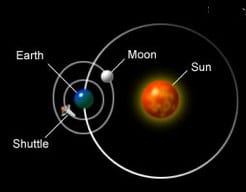 Back when I anticipated needing a news-column piece for New Years (I have since dropped that obligation), I had bookmarked this video called “What a Year on Earth Really Looks Like.”

At the beginning of a new year, I like to consider the bigger picture look at where I have been, where I am, and where I’m heading–inasmuch as one can ascertain any of those benchmarks through and past a year and a lifetime. Still, a grounding in time and space seems fitting.

What I liked on first viewing about the message of this video was that it brings to light the fact that a concept that we imagine as so simple and straightforward (a year) is really a vastly complex cosmological calculation, and NOT a fixed, endlessly-repeated pattern, though we use it that way.

And even if we do sort of comprehend that we’re on a spinning planet moving in circles around a star, if we were really able to trace where we had been the past 365 days, so many hours and so many seconds (depending on WHICH of the “years” we chose to measure our lives by, we’d see an amazing spirograph whirl of lines, a pattern in which we never are the same exact cosmic place for more than a split second, and never ever come back to the same point in the universe again.

That by itself might have been enough, if I had been able to make such a complex fact understandable, and beyond that, interesting to the average reader of the Floyd Press or Star Sentinel.

What has come along since I first bookmarked and watched this video is an unexpected dinner-party discussion that somehow tracked into and then never left the topics of faith-versus-science, myth and belief, and Purpose (or lack thereof) in the Universe.

It was a great discussion, with the three couples representing quite different understandings across the spectrum from scientific materialism to universalist spiritualism to science-tolerant Christian theology.

This What’s a Day video could make the point that science has allowed us made great advances in understanding the physics of celestial bodies and make accurate predictions confirmed by observation. Because of the tools of science, we know much better what constitutes a day.

But science can’t tell us what to do with one. Or a year, for that matter.

It turns out that in the void of writing to paper deadlines, I’m considering, for my own edification even if I never correspond with either of them, a careful response to one friend who, in my opinion, holds too high an opinion of science, and a climate-change denier who holds too low a view of science. I think the truth lies somewhere in the middle.

I’m enjoying the re-exploration of my own cosmology, trying to retrace that path I’ve taken, over many whirling swings around the sun, to be where I am right now, knowing that even here, one is in constant motion, held up by invisible forces that are nevertheless, real.

5 Comments on “So Where Has This Year Taken Us?”