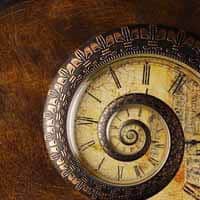 I have once again waded into a quagmire–the occasion, an opportunity to talk with the small group of high school kids as they begin to think about their place in the world–in time and in place.

Place is easier to talk about than time, at least when you confine the discussion to latitude, longitude and altitude. It gets harder when you think about your place on a spinning, tilting, sun-wheeling planet in a spinning, galaxy-circling solar system, the whole package swirling and wheeling its way towards the theoretical edge of the theoretical universe. (One of countless multiverses?)

FACTOID: One galactic year for us is 230 million years: the time it takes for our little star system to make a complete revolution around the entire Milky Way galaxy.

Time, on the other hand, has no physics or chemistry, though it is a dimension set in motion by the beginning of post-Bang physics–entropy in particular. And sci-fi speculation notwithstanding, this thing called time (which someone said was created by God so that everything didn’t happen all at once) seems to be one-directional.

We can travel into the future. Going the other way, not so much.

If you look for an understanding of what time “is” you’ll wade into some deep water. It is sort of like attempting to define what “life” is. Maybe it depends on what your definition of IS is.Â : > }

We can say what material beings that have life DO (respire, metabolize, reproduce, etc) but we still cannot define LIFE apart from those living things.

Wikipedia admits: “Time has long been a major subject of study in religion, philosophy, and science, but defining it in a manner applicable to all fields without circularity has consistently eluded scholars.”

So I feel a little better for my own puny attempts to know this medium that makes NOW the future of a few minutes past.