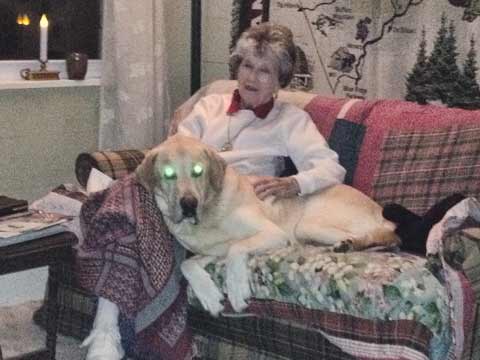 Tsuga’s last picture: His salute to Christmas 2011 (and my mom)

I will soon move on, on the blog, with more distance from last week’s loss. But at the same time, I want to make myself accountable to my small readership for this project–a readership that includes, perhaps, a disproportionate number of folks who have cared deeply for their animals, and for mine vicariously over the years at Fragments. I hope I can carry through to produce some final offering–most likely a digital book with many pictures–that celebrates the animals in our lives over the decades. I want to do it, and need to. And I think I could spend my time less wisely than this. In fact, I’m sure of it.

Forgetting is time’s way of healing. It leads to closure, we hope, but we never experience a perfect recovery from emotional pain,Â  never really return in our lives to the fiction we imagine as an antecedent “normal.”

The sequence of repair is not unlike the process by which a flesh wound grows back together. Intact edges of the painful cut pull closer as tough, fibrous scar tissue shrinks and tugs at the gap over weeks, months, years. The incision shrinks, the skin pinks up.

But recovery is slow and never full. The injury has memory, though it has been only a week–almost to the hour–when Tsuga began showing symptoms of a condition that would give us no choice but to put him down with an end to his own pain, and the beginning or ours–only a bit less sharp this moment than it was those first hours after he left us. Nature and the soul are at work, reknitting tissue that never entirely reforms like it was before the loss. And oddly, we covet the scars.

We don’t want full recovery, full forgetting, because diving beneath the surface of the pain of loss we submerge in and are carried back by a currents of wonderful memories. We find the tender places easily, and avoid them at first. But very soon, I will want and need to make myself remember.

Unless I take effort right away to make myself write out the story of who he was and who we were together, the memories that are still so painfully clear today will lose their crisp edges and color. They will fade just as he did so often moving away from us, off exploring into the mist in the pasture of an early spring morning, where he faded until his white shape finally disappeared, even though he was not far from us at all.

The mundane demands of the life we were living one week ago have not disappeared with your passing. One week later, we have just as many deadlines, just as many bills to pay and correspondence to return and chores around the place that did not stop after December 5 at 10 pm, even though it seemed right that the whole world should stand still–at least for a moment of silent recognition. And yet life goes on around us as if nothing had happened, no ripples move across the mirrored surface of any small pond but ours here on Goose Creek.

But I will tell Tsuga’s story, all of it–which is the story of our three labs going back to 1981–and will be willing to face both the joy and the tears these directed memories will bring. I promise I will not grow too busy over the holidays to make time to place a memorial of memory on the grave we chose not to give him. I admit some regret having refused the symbolic scattering of his ashes down Nameless Creek that we could have purchased from the emergency vet clinic.

But I’d rather send him off in words. I could not have come back to visit his ashes, and he was not in them. The words about his life, I can come back to, if I lay them down before they grow too dim to recall. And in the words, he, and the two that came before him, will live on.