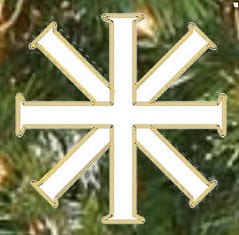 I remember at some point after I learned to write longhand, sending a letter home (from camp maybe?) where I had seen something (most likely something to do with fishing) that I wanted to target for December 25. I used the term Xmas in my letter to make my point. I was mildly rebuked for such a secular way of writing the name for this (at that time) sacred holy-day, taking Christ out of Christmas.

Years later, I remember being put off by a sign in front of a church (Church of Christ I think) whose symbol beside the church’s name was a wine goblet with a large red X across it. My reaction was one of disappointment that a church would so blatantly proclaim its primary message as opposition to drinking alcohol.

Both of these instances reflect the persistent public mis-information in the use and meaning of X in the Christian context. It does not seasonally replace Christ with X as in “an unknown quantity” or a name not to be uttered or written or acknowledged (though by some it might be intended in this way.) It does not represent on the church sign the X meaning “not allowed” or “do not enter” or “evil” as in X-rated.

X is the greek letter chi, pronounced as a hard C or K, as in “bach” or “loch.” It is the first letter of the word Christos–Christ’s initial, if you will.

Certainly there is room for confusion, as the symbol has been used in so many ways in mathematics and society. X marks the spot on map; denotes the signature of the illiterate; represent the cartoon eyes of a dead character.

Other misunderstood Christian symbols include the Greek letter theta–a circle with a line across it. No disrespect is intended. It does stand for a ZERO or NOTHING. This is the first letter in the Greek work for God, Theos.

And the familiar fish symbol often seen on car bumpers and other sold stuff is an acrostic derived from Greek letters that spell out the word ichthys, or fish.

Ichthys consists of five letters from the Greek alphabet: I-ch-th-y-s. When these five letters are used as initials for five words, we obtain this Christian Declaration: Iesous Christos Theou Yios Soter. This is an acrostic for ‘Jesus Christ, God’s Son, Savior.’

The simple fish figure may or may not have been used as a secret signal of recognition traced in the sand by fellow X-tians as the commonly-accepted story goes.

So, while much of the Christian community’s concerns about the secularization of Christmas make a valid point (Fox News nothwithstanding), the “Christ out of Christmas” argument is, well, fishy.

9 thoughts on “X is Still in Xmas”