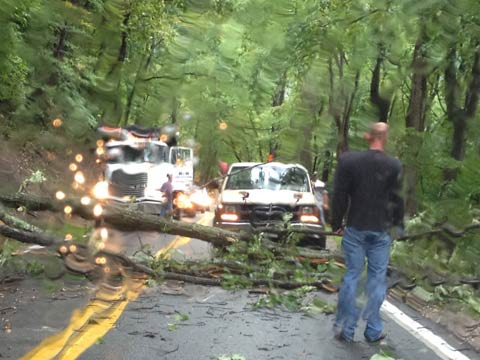 The bad news is we are not likely to ever visit the BadlandsÂ  or the Black Hills again. The good news is that our daughter has moved from South Dakota to the coast of North Carolina.

The good news is that we have successfully made our first trip to the Wilmington area to visit my daughter and her family. The bad news is it wasn’t an easy trip getting down because of the massive tropical storm like rain that followed us most of the way.

We had not but just crossed over the Floyd County line and started down the Blue Ridge Pkwy when we encountered a fallen tree across Route 8.

It must’ve fallen not a minute before we rounded the sharp curve and thankfully were able to see it in time to stop. Traffic backed up on both sides over some while because — wouldn’t you know it — we were in a dead zone for the phones.

Thankfully, one resourceful young man in a truck (that seemed much too small for the job) was able to tie a nylon strap onto the tree and pull it far enough out of the road so that one lane of traffic could get by. In the end, it only slowed us down about 20 minutes.

The worst part to come was encountering the hardest rain I’ve ever driven in somewhere east of Greensboro on 40 — a stretch of interstate we would not have taken, had we not trusted the robot voice lady who gave us some bad advice. Next time, we will travel through Hillsborough and avoid 30 miles of interstate.

BTW, I used the new Apple maps navigation that came with the IOS6 upgrade on Wednesday, and it worked just fine, though I’ll likely revert to Navigon that I paid for a year ago, that has some extra bells and whistles (like warning you when you’re driving (however many miles per hour you set) over the speed limit. This would NOT work for Ann. Who knows no limits.

So, while that is not very exciting, it is all I know to tell you, playing catch-up at home this morning, and preparing to speak to what I hope will be a lively and engaged group of book club folks this evening, then the market breakfast tomorrow. Y’all come!