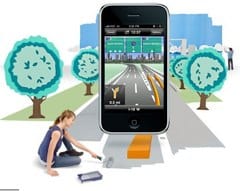 I have probably already mentioned that, in the move from Android to Iphone a few weeks back, the biggest regret has been the loss of Google Navigation based on Google Maps. The default map apps that ship with the iPhone are disappointing. The couple I’ve installed (for free or a dollar or two) each have interesting elements, but are slow or inaccurate or have other quirks.

We missed an important turn going to Richmond recently because the roads were poorly marked, but also because the navigation app I was using did not clearly show the route and the visuals were too small to see while driving. I would gladly pay for a navigation program that would save me future agonies of being lost (and more specifically, the marital abuse it spawns.)

And along comes Navigon, just released in version 2 last week. It is a Garmin-supported product that allows you to only download maps as your travel needs require. The visual display is great, the voice nav is clear and timely, and until Nov 30, the US version is $30, usually $50, so I feel like I got a great deal.

However, I was cussing the blanketyblank thing going down to Birmingham last Saturday. It routed me through Nashville, and it kept insisting, after I committed my route towards Chattanooga that I veer WAY north to go through Nashville. What the hay? Turns out, the problem was my route would carry me through the tiniest corner of Georgia. I had not installed that map. My bad, and I am sorry about all the nasty things I said about Navigon til I figured this out.

About half way down, I sent my mom a “Glympse” that she could follow on her iPad. This free app (for Android or iPhone) sends an email with an embedded real-time travel map, showing the traveler’s progress towards their destination. I wasn’t sure she could view such a thing on her iPad–or would bother.

But when I drove up to her apartment, she was standing outside waiting for me, having followed every turn and stop for the past hours, and “seeing” me turn into her apartment complex on the Glympse map screen. There are many practical uses for Glympse. “Share your where.” Check it out.

3 thoughts on “A Brief Glympse at Navigon”