Last weekend’s storm missed us down on Goosecreek, but took down many branches and some trees between town and gandy’s dog kennel Saturday morning before we left for St. Louis.

Power went out Friday night at 9 o’clock in the storm but our neighborhood told us by email but it came back on again Sunday at five. His house down the road and ours are on the same circuit so it was logical assumption that ours had come back on.

However, we learned yesterday that our power did not come back on the cause of a tree down between the neighbors house and ours. So everything in our refrigerator had been without refrigeration for more than three days..

A good neighbor is one who offers to take care of such a mess, so that we won’t confront the worst of that when we get home on Thursday.

As you can see from the picture taken just now from our motel window, we are not in Kansas anymore, Toto. 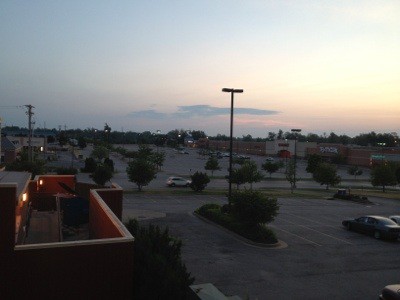