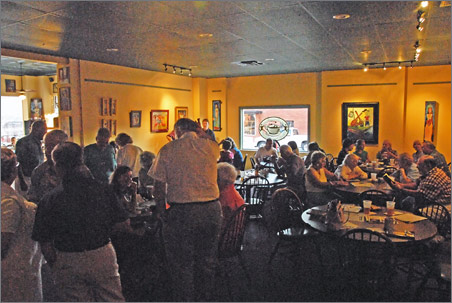 Many thanks for the invitation to be one of six readers at the Edible Vibes Coffeehouse in Rocky Mount last night. And congratulations to me for the first time ever heading for a Franklin County destination and NOT getting turned around–in spite of Google Maps lysdexia in the naming and placement of those tortuous roads, that, contrary to a navigator’s expectations, do NOT eventually come out at a recognizable intersection. Trust me. I know this.

The space was packed, standing room only, the crowd attentive, the cappuchino machine mostly mute, and the readers constrained more or less within their 15 minutes blocks of time on stage. Two hours passed pleasantly, filled with entertaining and stimulating readings that were well written, well read and well performed. I’ve put up a little gallery. Apologies I don’t have a picture of Becky Mushko, nor did I thank her for her kind introduction last night; she chose (as I did) not to use the microphone, so stood where the light just didn’t make a photo possible.

I waffled about what to read until I stood up for my spot. So much of Slow Road Home comes from a quiet place, from still waters. And following on the heels of the ukelele music (that’s right!) and theatrical readings of previous readers, and with the background buzz of coffee machines, and street rumbles, should I read pieces as tame as Dry Wells and Showers of Blessing–about drought, then the blessed rain? Gulp. I went with those pieces–first time ever I’ve read these very serene and reflective pieces to a live audience.

And then I read what will be the next Floyd Press piece, and those of you who come back can read it here toward the end of next week. Testing the waters is what I was doing, not sure if the general audience would catch on to the fictional voice speaking about a very real and urgent natural resource issue. They caught on. I’m relieved. And I get to tell Ann “I told you so.”

When I left Rocky Mount to come home at 9:15, I switched to the Weather Band just as “current readings” gave the temperatures of nearby localities. Danville, 90 degrees that with the high humidity feels like 95! Roanoke, 87. When I pulled into the driveway here on Goose Creek, it was 73.

It’s good to go off mountain to be among friends, but my gracious, it’s good to come home. I stepped out of the car into the sweet dark, thankful for the babble of Goose Creek that, though diminished, still sings our summer-night lullaby. The steady light of a satellite dimmed overhead, slipping silently through invisible clouds in an otherwise clear canopy of stars. The dark smudges of the “Coal Sacks” muted the galactic star-show, a visible blackness that tells of lower humidity and gives hope of a cooler night ahead. And life is good.