A Couple of Earthy Things 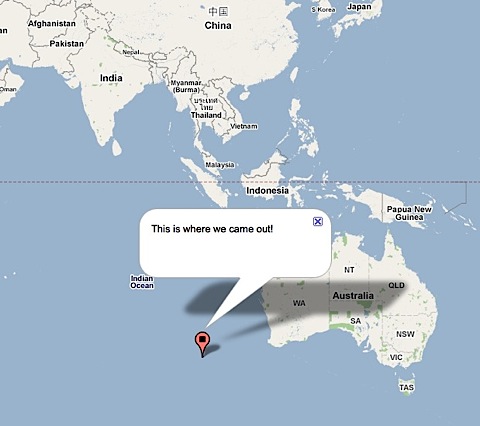 How many of you were told as children that if you dug a hole through to the other side of the world (and your parents may have started you on the task as mine did) that you’d come out in China? Well, I’ve just checked that out, and darned if my parents are not totally discredited and I will never ever believe anything else they say. From our back yard, you see we just missed Australia’s west coast–a long swim for a tired digger.

See the Google Map function called “Map Tunnelling” and as you’d expect if you think about it, from anywhere in the northern hemisphere, you’ll come out in the southern ocean somewhere. So much for emerging from my hole and seeing curious yellow people in cone-shaped hats and rickshaws. And my, how our national stereotypes have changed, now that I think about it.

AND….If you’re interested (I haven’t found many people who seem to be, which puzzles me) the largest, most complex, most expensive science experiment in human history (and some few think it may be the LAST) will be underway in–see the countdown timer–four days and 17 hours as of this writing.Â Â  Structurally, the Large Hadron Collider (not in our back yard) is the equivalent of building an eight story high 17 mile ‘round International Space Station underground.

Let’s just call it what it is: the Lesser Big Bang Machine. The pictures are awesome.Â Â  You look at all those hundreds of thousands of connections, switches and dials and thousands of miles of cable and think could anything possibly go wrong? Nah. We’ve never had any unforeseen human or mechanical error in our space program, for instance.

7 Comments on “A Couple of Earthy Things”