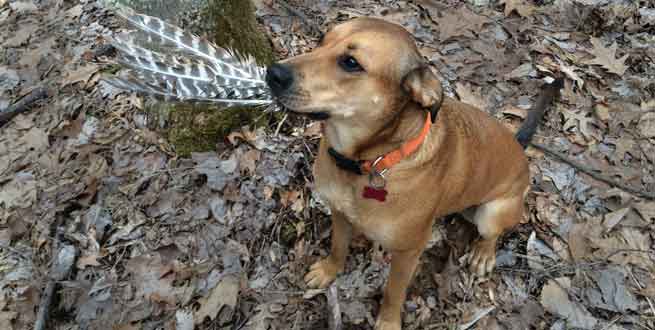 While Gandy will lick the pattern off a plate with the merest traces of turkey gravy, she apparently does not care so much for the source bird in the raw.

However, the hillside remains of a local wild turkey has turned out for the dog to be a major stop along the Goose Creek Gorge Trading Route.

Last week coming back from a walk around the loop with Ann, Gandy marched proudly up the driveway carrying the oddest stick. (She almost always brings back a memento of the walk–a chunk of ice from a snowbank, a six foot branch near fence-post proportions, or something offal–as in dead and stinky. )

The wooden bits go to Gandy’s workshop, but the organic objects more often than not become bargaining pieces. The thing she carried up the driveway last week was a stick with a distinctive foot–at the end of what would have been for us a thigh and drumstick, now meatless.

She didn’t want to eat the footed stick. On the other hand, she was certain from past experience that we would not want her to eat it. For that outcome, there is a price.

In such cases, the inedible foul fowlÂ  object can be traded for a desirable (if not much tastier) replacement: a doggy biscuit made of sawdust and cardboard. At least that’s what they seem like to us humans.

Yesterday on our way past the valley of bones and the turkey carcass somewhere up on the hillside, the dog came running down with a mouth full of feathers and sat immediately at our feet. Her new find could be exchanged for sawdust and cardboard.

It’s a pretty good system. Inside the house, the system works just as well, except the exchange involves one of my socks or a pair of panties.

You want it back, show me your money.

3 Comments on “Barter, Bargain or Bark”