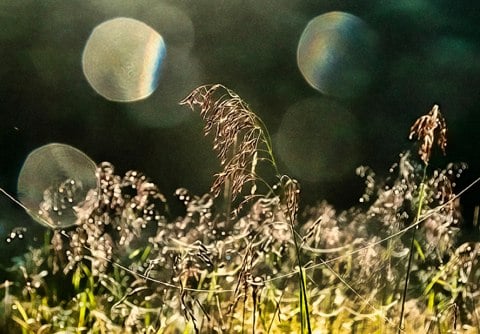 There is no standing pasture, finally, after expecting it to be felled since early June. So no more spider webs or grasses heavy with dew. This one, and a few others I may yet post, are all that I have to mark summer of 2012 memories of the “front yard.”

With the single strands of web, this image reminded me of a recent shot I saw of some guy walking acrossÂ NiagaraÂ Falls gorge on a tight rope. The circles of light I think come from the water droplets that adorned my UV haze filter as I waded through the waist-high grass in pursuit of the light of that morning.

Hence, the title. Life under the Big Top…

Where the future of Fragments, I think, will be different from its past decade. No more attempts to engage in conversation about issues far more important than spiders and snakes of Goose Creek, but those topics–the hardest kind of post to create–are gaining absolutely no traction and leading to an excess of frustration and disappointment.

Meanwhile, I’ll pour my words and energy into other less public-for-now endeavors. And post the occasional photo. A dog or chicken story from time to time. And the local happenings from town and county.

But the word du jour is UNCLE. I have finally let go that part of the activist in me that thinks of this blog as an outlet or platform. Been there, done that. I only hope that such matters are being effectively shared and actions underway elsewhere on the increasingly wide and noisy interwebs.