↓ Skip to Main Content
Home › Uncategorized › Far From the Tree

Far From the Tree 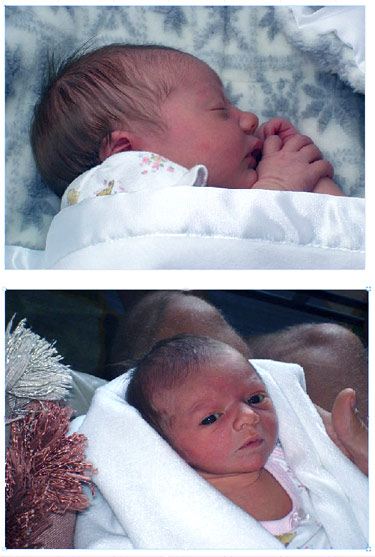 The acorn doesn’t fall very far from the tree, the old saying goes. And best I can figure, it probably has had two meanings:

And, in an earlier time, perhaps it meant that families tended to cluster together, at least loosely, and over time, build to become a kind of kindred tribe.

Well I don’t know about the first meaning. It’s too early to tell if any of the First genes by way of our daughter will manifest in the appearance of little Taryn born a week ago, our second grand daughter. And later, for good or ill, we may see some of her momma’s personality coming through in the attitudes and aptitudes of this little acorn.

I do know this fruit fell more than a thousand miles away from both scions of the tree–on Goose Creek and in Cullowhee NC. The paternal g-parents just returned from South Dakota. We’ll be heading out that way very soon. And you can be sure there will be pictures. Little Abby shares the viewfinder now with a newer member of the tribe.

And someday–can it be?–we’ll have one tiny girl playing in the creek here with an elderly Tsuga, admired by her teenage sister, doted upon by her Grannie Annie, and photographed by her decrepit old Grampa Grumpy (who Taryn may also refer to as “the Dumpster” just like her older sister does.)

11 Comments on “Far From the Tree”