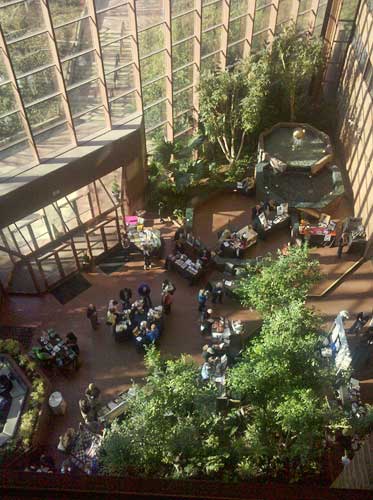 The fiction I wrote in my mind of how it would be did not match the way the story line actually played out at this year’s Festival of the Book in Charlottesville. It was a fabrication on my part–only cautiously hopeful, aware of the possibility that one could spend hours–even days, it turned out–amidst legions of readers and writers and have little interaction unless it was structured into the Big Plan. Having never been before, I just assumed surely it would be.

I imagined, as has happened at some conferences, that there would be a happy hour mixer at the hotel for authors and their guests each afternoon.

After that, before the evening presentations at eight, I concocted the possibility there would be pick-up caravans to local restaurants, organized perhaps by genre: fiction writers here, children’s authors there, and other places for crime, poetry, non-fiction and romance authors.

And of course, authors would have nametags from day one to be able to be told from readers who had come to hear them speak.

All of that was my own fiction and not the way the event was structured. The festival, in all its complex scheduling and use of multiple facilities and I think I heard more than 120 authors, very efficiently got readers in front of authors. It was my creative but wrong-headed expectation it would efficiently bring authors together with authors. So outside of the scheduled programs and contrary to my fairy tale, I spent far less time in the company of others than I had imagined I would–until Saturday.

But Saturday was better. By 9 am all the author tables were set up in the atrium and ground floor of the Omni. I spoke with quite a few, learned some things and was able to share some of my experiences that will help a few in turn. I have a stack of business cards and bookmarks and will follow up with a visit to their websites, and hopefully one or more will wander my way.

I turned around at one point and there was Lee Smith. She’d have greeted a complete stranger in her genuinely warm way, but brightened when I told her my name. “I’d seen in the program you would be here.” She remembered I had sat in on her memoir writing class at Hindman in 2007 and we had talked about how to keep small towns from dying–hers near her mountain cabin down in NC. I was delighted to hand her a copy of What We Hold In Our Hands: a Slow Road Reader, knowing she would be speaking later that day on “Sense of Place: Landscape and the Southern Writer” (about which more here this week.) Both my books lead the reader to consider the role that the landscapes of their lives play in their thought, belief and character. I hope Lee will actually look at my book, but it was gratifying just to hand it to her.

Also at that session were the winners of the Southern Environmental Law Center’s Reed Environmental Writing Award. John Hall (text) and Beth Maynor Young (photography) won the book award. Both of them were present and John spoke about their joint effort: Headwaters ~ a Journey on Alabama Rivers. It is the only book I bought at the festival. I’ve canoed many of those rivers in my college years. Beth told me that the book was a record of her evolution as a photographer, starting with film cameras and progressing into digital to the Canon 5D Mark Something-or-other. The enlargements are stunning. What a fun project as a photographer, I thought.

The other Reed award winner (journalism) was Becky Johnson who writes for the Smoky Mountain News–her beat, an area dear to my heart. We lived in Sylva, near the front door of the Smokies for a couple of years because I wanted to be immersed in those mountains, living within view of them. Becky won recognition as the lead writer for a special edition of Smoky Mountain Living celebrating the 75th anniversary of the Great Smoky Mountains National Park in 2009.

Nikki Giovanni (well-known poet from Virginia Tech) attended Lee’s session and was at the book signing later. (She was a Reed Award prize winner previously.) I was able to tell Nikki how, in 2000, listening from the wings of the lobby as she lead a memoir class at the Warm Hearth assisted living facility where I was therapist, I got the notion for the first time that I ought to be writing out of my life experience. (I remember coming home that day and exploring the differences between memoir and autobiography more familiar to me from grade-school reading about great men and women.) I was glad to be able to thank her for planting that seed. Two years later and exactly eight years ago this week, the writing–in this blog–began a new “career” for me. (I asked several at C’ville and they concur that it is okay for me to call this my third CAREER, even though I’d starve if I had to live off what little I make from it!)

Lastly, I was pleased to become aware of the work of the Southern Environmental Law Center headquartered in Charlottesville. We’ve supported the NRDC literally for decades, and will likely swing some of our contributions in the direction of SELC for the work they do in the south.

1 thought on “Festival Fictions and Facts”