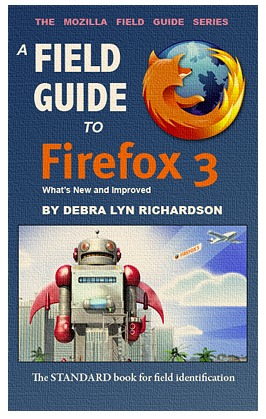 This is sort of a big deal: the long revised and much improved version 3 of Mozilla’s Firefox browser. Ah, you’ve come a long way, l’il monster. Mozilla was originally “Mosaic Killa” in its wannabe stages in 1994. You DO remember Mosaic–the first step I remember beyond gopherspace. Yep, then their Netscape browser killed for a while. And now Firefox 3 just might be the ultimate giant slayer.

And it matters. The browser has become so much more than it was in Mosaic’s day. To a large degree, as the browser goes, so goes the Internet. More and more folks use it as the central hub for everything they do, from banking to creative media, communications, and commerce. A stronger browser means a stronger Internet, not to mention greater efficiency and pleasure in using a well-thought-out tool to Get Things Done.

All that aside, I would “open the pages” of the Field Guide to Firefox 3 just because the creators of the guide did such a great job with the field guide mockup–which I certainly hope at least some of you recognize as modeled after the Peterson Field Guide series in its earlier incarnations with the medium-blue textured paper cover, adorned now not with wildflowers, birds or trees but the swirly orange fox that has wrapped itself around the globe. (The retro robot, I’m sorry, somebody was having a bad day.)

The guide is also useful to drill down into the inner workings of the improvements in FF3, not the least of which, in my opinion is the smart location bar or “wonderbar”. Matter of fact, there was an add-on in FF2 that did much of this work, but now everybody who uses the default browser has this instant search of bookmarks and history. The fact that it will not crash in its Mac incarnation (he said hopefully) is another thing to love.

Tuesday June 17’s FF3 download promises to be the single largest one day software download in the history of the web. (Add your name to the pledge!) I know I have an alarm set for first thing in the morning to hopefully beat the crowds of folks who will want their copy soon as the sun comes up.