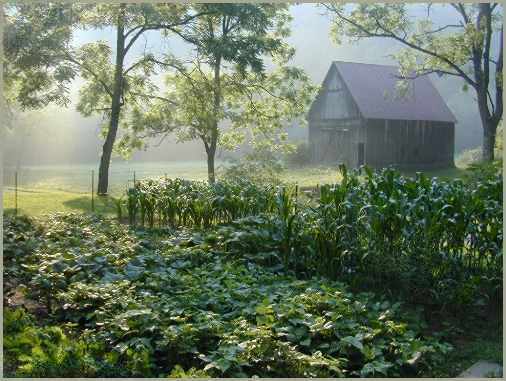 ** Garden: Total defeat. Why the same 4-strand electric fence successfully kept deer out the first few years is beyond me. Apparently there is some learning going on, and none of our efforts to weird them out with spinning CD’s or leave olfactory trails around the perimeter every night were effective. So, a neighbor with a backhoe is coming to level out a small patch nearer the house. We’ll sink 10 foot posts, put up 8 foot tall woven wire or cattle panels and build next year’s Gulag Garden. Those “free” vegetables are going to be costly, but at least maybe we’ll eat some of them next year. (Image: Good Garden of ’03. Sigh.)

** Home: The rotten egg/sewer gas smell we lived with most of the spring has now been solved. Turns out, a gas pipe when installed was supported on a large rock in the crawlspace. Condensation accumulated at that spot, and in 8 years since the house was “improved” a hole had corroded all the way through that heavy iron pipe. Thanks to Clark Gas for finding and fixing the problem so that my dirty sox no longer get the blame.

** OnLine: I signed up and have “approved” contacts wanting to add me to their “Facebook” pages, not having a clue why anyone would want to do so. I just haven’t been sucked into the sphere of this new “place” on the web. And I have felt somewhat oddly guilty about that. So I’ve started wandering over that way a little more of late, warming up some to the appeal of FB. Then this morning, I get a response to a question I’ve ostensibly posted asking the drinking age in Poland. Somebody’s hacked my identity–innocuous this time, but they could post any kind of junk as “me”. Don’t like that.

** Small World: I was talking with an academic friend recently about writing, and mentioned the two books I am reading stemming from my Hindman experience. These two authors have voices and styles I’d like to learn from. The first, not surprisingly, was Annie Dillard. Turns out he has written a review of Maytrees, not yet published. “And” I said with great enthusiasm “there’s this book called Birdsongs of the Mesozoic”. My friend brightened: “I went to school with David Brendan Hopes and we’re in touch; we discussed at length Pilgrim at Tinker Creek back in the 70’s.”

** Offline: Thanks to Gary B for the pointer to Play, Spirit and Character at Speaking of Faith. I’ve downloaded the broadcast to listen to on my way home from Rural Retreat tonight. Book Two, if it happens, may have traces of this topic woven into the narrative of the photographs.