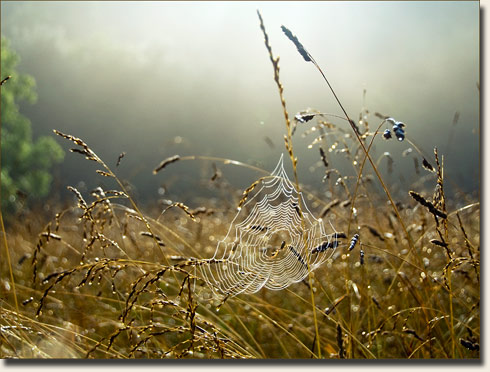 Nothing tastes better than fruits or veggies warm from the sun, soft and ripe out of the garden of a morning–the transfusion immediate from Earth to Man. Pluck and eat, the cycle complete.

I feel the same way about a certain kind of photo-moment, and just had one of them. Not only that, but had the opportunity to confess this “fresh-eaten images” feeling with someone the other day over coffee. Amazingly, he seemed to understand.

So HM, this morsel is for you, not a half hour old as the sun rises over our un-mowed pasture–not so good for hay but wonderful for spider web pix.

Which reminds me of a little piece from Slow Road Home, and I’ll take the liberty to plegarize from the author as I’m certain he would approve:

I’ve been asked more than once what it might be we plan to do with ‘all this land’. The question is often asked by those who think, because we are ‘from off’ that we might not know how to use land wisely.

I have an idea of the answers that they expect. I could tell them that someday we will fence it off to keep a few head of cattle; or I could say that we were going toÂ  plant Christmas trees like so many other landowners in the county who can’t make their land pay for itself by farming alone.

The truth of the matter I’m not certain yet what we might do with this bit of pasture. But I believe that, until we decide, when they ask I will tell them this: I plan to use this bottomland for taking spider web pictures.