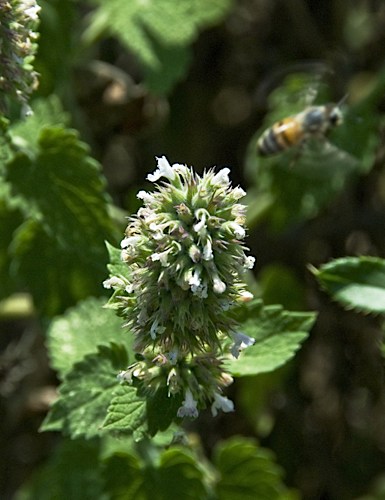 Some few of you may recognize this wild roadside plant as catnip (found in every state but Florida.) This particular patch was buzzing, I’m happy to say, with honeybees. You can see the one that got away.

We used to collect and dry Nepeta cataraia (a mint–in hand, notice the square stem characteristic of most mints) and use it in a tea ball for its purported relaxant properties. Or we’d pull some off the stem on a cold indoor-crazies winter evening and toss it over near one of our cats and enjoy the show. (Search YouTube for catnip; you’d be amazed how many home videos there are of cat antics on this pot-for-felines. Here’s some interesting info on the drug:

Catnip affects approximately half of all cats. What determines whether or not a cat will react to Catnip is a genome that is inherited (or not inherited as the case may be) at birth. Kittens, regardless of whether or not they carry this genome, do not react to Catnip until reaching about 3 or 4 months of age and becoming sexually mature. Older cats are also more likely to have a diminished or non-existing reaction to Catnip, which leads scientists to believe that the Catnip effect is based at least partially on sexuality and that the reaction may be something like an aphrodisiac. Further adding to this belief is the similarity of a sexual pheromone found in the urine of the male cat to nepetalactone (the active product in Catnip).

Cats that can be traced to regions where Catnip is not indigenous appear to be unaffected by Catnip. The domesticated housecat is not the only cat that may be affected by Catnip. Larger cats can also be affected by the Catnip effect, felines such as the bobcat, lynx, tiger and even lion are known to react much the same way the common housecat would. It is interesting to note that while Catnip can act as a stimulant when a cat sniffs it, it can conversely act as a relaxant if ingested. Therefore, you may see a different, nearly opposite result depending on whether your cat chooses to eat the Catnip you provide for him/her or merely sniffs it (the latter being the more typical behavior).