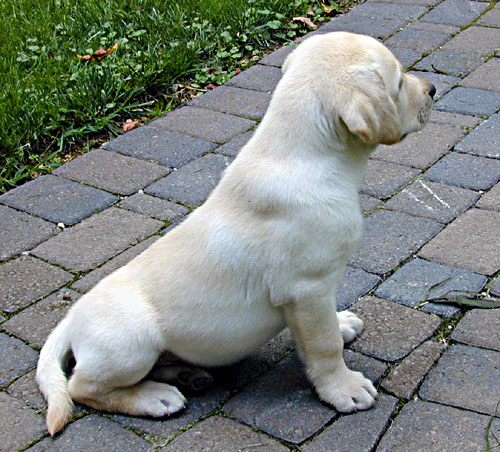 I went out to turn the truck around yesterday to drain all the accumulated rain from the bed liner of my poor old rust colored 1996 Dodge Dakota truck. Tsuga went out to help me. As I got out the passenger side, he went over to mark my right front tire and all of a sudden began rubbing his face on the ground, running around like something was after him. That indeed was the case: seems we were gone long enough for yellow jackets to build a nest somewhere under the body of the truck–maybe in the engine compartment. We’ll have to go out with the flashlight of a cool morning with the RAID I suppose.

(Footnote: Tsuga turns FIVE YEARS OLD today. Some of you will remember his early days in our life just after the sad passing of Buster the black lab at only four years old. I’m happy to report that Tsuga’s hind quarters did finally catch up with his beefy upper body.)

I ignore my “messages” in Flickr as they only tell me some stranger has become my latest contact. I really haven’t played the social networking game much, including not on my Flickr pro account. Maybe I should pay more attention. Yesterday I saw a message from February, subject line “Use of images”. It was from the director of a very large state zoo wanting permission to use some of my shots in their publication with photocredits. I wrote him back anyway with apologies. Maybe something will come up in the future, and I’ll be sure and notice new Flickr emails now.

Do your children (or do you for that matter) know about the birds and bees? How many of you could use the following words accurately and in proper relationship in a short paragraph? Flower, seed, pollen, fruit, vegetable, pollinator. I imagine 99% of folks would stumble at least a couple of times and end up with “and then some other stuff happens” to get through the story. This is an incredibly important part of our planet’s remarkable life that most are ignorant of–to our peril. Go (with your kids–it’s Safe For Work Sex) and re-discover the workings of the birds and bees. Heck, it’s National Pollinator Week and the Pollination Partnership site is one of the best designed and most resource rich sites I’ve ever seen. Check out Selecting Plants for Pollinators for your ecoregion. (And NOTE: in the UK it’s also National Insect Week.)

Who do you love–family first? Plants, too. Yes, recent evidence suggest that plants can recognize genetic family ties with other potentially competing plants and give its “ken” preferrential treatment. The Guardian article points out that there is a scientific society called Plant Neurobiology whose site uses the terms “plant intelligence” and “plant memory”–with the understanding that this means something different than the same animal qualities. Fascinating.

Quick request for advice: Three computers need antivirus: Mac Pro for the weeny bit i use Windows programs; IBM Thinkpad for work and occasional browsing; and Dell desktop upstairs used only for email checking by the wife. What antivirus or Internet security program do I need? Preference is to use the same software on all machines, preference is FREE. So, where do I go?