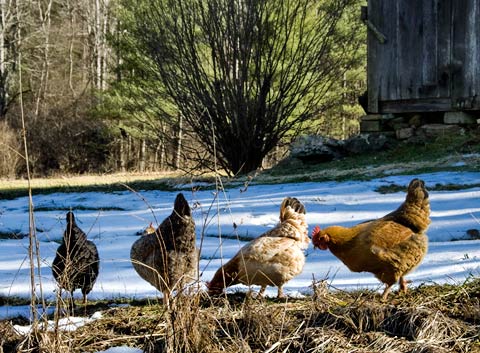 We will NOT be held captive by the 13“ of snow over this weekend like we were the Dec 19 snow that was followed by weeks of subfreezing days and nights. Yes, it is 9 degrees at the moment, but the trend this time is for many hours this week above 32.

Black ice in the mornings will persist for a week or two, so Ann’s pre-dawn and late night travels will still get the stress hormones flowing, taking its toll, making us search (in vain so far) for signs of spring, except for the noticeably longer days. We measure the end of the day by when the chickens put themselves up; it’s now just just past six that they give up free-ranging and find their perches.

I’m happy to report my back pain only registered at its worst a 4/10 on the personal scale of LBP experience. I have known 10/10 a couple of times. I even was able to use my new bent-handle ergo-snow shovel, especially as one pushes it much of the time, and when lifting, that can be done from an erect posture. That little tool was money well spent. Both cars are dug out, save for mine where VDOT left me a 3 foot berm to clear before it turns to ice.

I’m not needing to get out of the valley here before Wednesday, far as I know. I’ll be going down mountain to meet at Montano’s Restaurant with the Roanoke Valley Pen Women, a group of writers out of which I only know that I know one member, Becky Mushko. I look forward to reading a bit from What We Hold In Our Hands: a Slow Road Reader and to conversation about the processes and purposes of the written word.

The aforementioned snow shovel will come in handy, probably later today, when the snow slides off the barn roof into the chicken pen. (Don’t get me into the ”I told you so“ mode here.) It is only maybe 6” deep on the east side of the roof, but more than adequate to require the St Bernards to find the buried hens. I will let the Chicken Maven apply the mouth to beak resuscitation, should that happen. We’ll move them right away to their alternate housing in the far corner barn stall where they love fluffing in the dry dust and finding the bird-food mix we toss in the hay bedding. I love listening to their conversations when they don’t know anybody is listening.