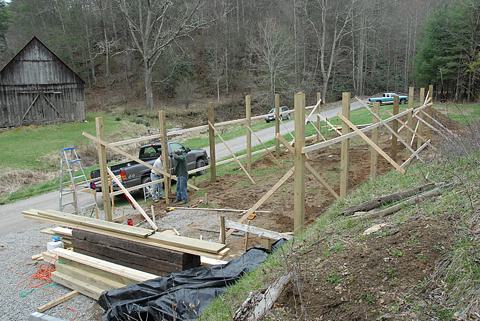 Yes, I know one usually speaks of the season’s garden going IN. As you can see here, this one heads in the vertical direction so that later, the horizontal efforts will not become wildlife forage.

We’ve thought of some things we can do eventually so that the “stockade” doesn’t look so formidable–train flowering vines on the wire (preferably something distasteful to cloven-hooved creatures) and more practically, put one of those owl decoys on top of one of the posts to deter the crows.

A 10 foot deep shed will go up at the far end of the garden for tiller, mowers, and tools–and maybe a month’s worth of dry firewood.

The former garden was farther from the house (behind me as I took this picture yesterday) off near the pines, more in the shade and over the septic field.

Since nothing around here is level, we’ll have to put in railroad ties outside the garden on the road side to build it up. A little gradient is okay, but too much and we’ll have our topsoil end up in Goose Creek.

I’d love to get a dump truck load of composted manure into the soil but that’s not going to happen this year. We’ll do what we can with top-dressing of 5-10-10 and get the soil tested early next year to see what it really needs.

I figure, if we live to be, oh something like 286, our “free” vegetables will pay for putting up this barrier–without which otherwise we’re at the mercy of someone else’s labors for green beans, corn and tomatoes.

I’ll post more pictures soon, and along during the growing year (he said with mock confidence.)

3 Comments on “Garden Going Up”