HIVE MIND: A Time to Dance

Aug. 1, 2008 — In July of 1518, a woman referred to as Frau Troffea stepped into a narrow street in Strasbourg, France and began a fervent dancing vigil that lasted between four and six days. By the end of the week, 34 others had joined her and, within a month, the crowd of dancing, hopping and leaping individuals had swelled to 400.

Authorities prescribed “more dancing” to cure the tormented movers but, by summer’s end, dozens in the Alsatian city had died of heart attacks, strokes and sheer exhaustion due to nonstop dancing.

For centuries this bizarre event, known variously as the dancing plague or epidemic of 1518, has stumped scientists attempting to find a cause for the mindless, intense and ultimately deadly dance. discovery.com 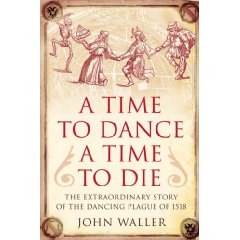 Because I’m not going to have time to finesse this topic, let me go ham-fisted to the bottom line: I found this clipping above in my To-Blog archive from a week or so back–a story about the ability of the human swarm to share a common delusion, inspiration or fear. In this case, that sharing is manifested by bizarre behavior that “spreads” from the few to the many.

Having just watched the Olympic opening ceremony on the NBC web site, the moment those thousand young men sprang out of the boxes they had so precisely lifted and lowered individually to collectively create a choreographed work of art, I remembered the story of the “dancing plague”. The two are instances of group performance are quite different, but it made me think.

There are cultures that share a common expectation and hope, dream the same dreams, and can do incredible things together that they can not do alone. America used to be such a place. Now, individually, we dream our own private dreams, and they may have little to do with community, nation, or planet. What an incredible power, lost.

Somewhere is a balance between the power of the hive mind and the power of individual ingenuity and ambition. Will China find that balance? Will America regain it?