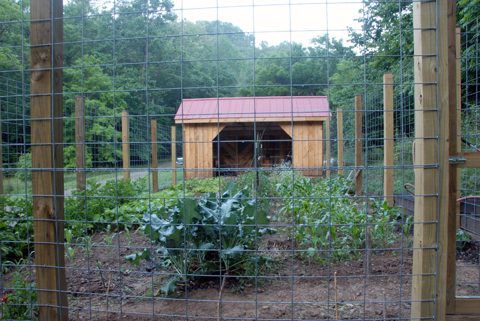 The Butternut squash vines that found their way outside the Fortress were snipped back by the deer–animals that I hope are eating their hearts out (other vital organs would be fine as well) because this year they can’t get to the good stuff. The insects, on the other hand, are in high cotton.

So far, it’s the broccoli leaves that are turning into lace, consumed with amazing speed by Imported Cabbage Worms–tiny fusiform velvety-green caterpillars of a rather innocuous white butterfly–that have remarkable appetites and can quickly devastate huge segments of the leathery gray-green leaves of our two-foot-tall broccoli plants.

The heads are starting to form, and it doesn’t take much insect poop down in the dense florets of a growing head of broccoli to make it unsavory. So far, I’ve managed to pick the little buggers off by hand as we only have 8 plants, but that means examining each left, top and bottom, twice a day. So far, there’s enough leaf left to support getting at least one major head from each plant.

I don’t know why I bother, really. I’m not a hugh fan of the vegetable. But when it’s yours since it was just a sprout, the gardener is more like a caregiver, a custodian, a parent even–except in the end, we’ll eat these babies, unless we have to throw them out with the insect-poopy bathwater.