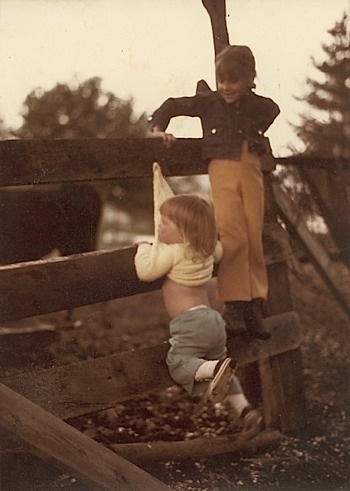 I feel like an exam is past, and it wasn’t bad at all really. But I was so focused on getting the pictures right for another family’s Fathers Day gathering that I almost forgot until the afternoon phone calls that I was a father too!

My daughter called from South Dakota. I had sent her the image above from not so many of our thousands of snapshots in a box upstairs that I’ve scanned. It must have been from early 1976. We had gone out to the country to visit a student who had become a friend–a venerable old fella in his mid-forties which seemed ancient back then.

Holli had climbed up on the gate to get a better look at the livestock, lost her footing and her yellow sweater caught on a nail. Loving and vigilant father that I was, I ran back to the car for my camera to preserve the moment, and also for serving suggestions for the next time I was left alone to babysit. Here was a new way to keep up with the kids!

Son Nate called from Missouri. He’d picked out the chords to my “theme song”…Tommy Thompson’s I Got Plans. The boy and I sang the whole thing through over the phone. Today he retakes the law exam to up his chances for a scholarship. God speed, l’il man. We got plans.

Could be I’ll pan for gold, write a novel, or join a band.
I could sell produce from a roadside stand.
Sturdy wife to share my joys, a pair of healthy strappin’ boys
They’ll lend a helpin’ hand, we’ll make a fortune off the land.

When I grow up, I’m gonna settle down,
Chew honeycomb and drive a tractor, grow things in the ground.
Oh, the dream that’s in my eye is just tomorrow’s enterprise
I may be broke tonight but I got plans.

3 thoughts on “Just Hangin’ Around on Fathers Day”