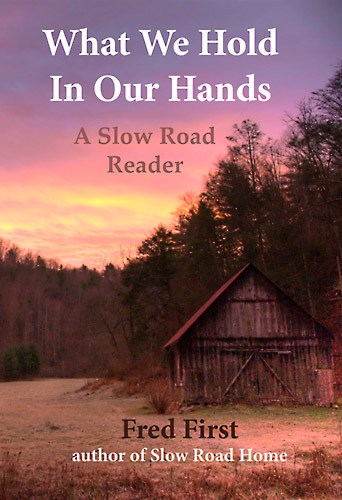 Well this is a late blog post for me, up since 4 as usual, and things–like therapy evaluation paperwork–came first. Ah well.

And now I need to get back to the book construction. Speaking of which…

â˜¼ Good news on that front. I am meeting tomorrow with someone who knows much more about InDesign and design in general than I do. So some of my technical angst has been relieved!

â˜¼ For those few of you actively looking at a chapter draft, I’ll be using most but not all the personal essays you are looking at (so keep at it please!) but have decided to abandon the linear, aggregated by topic organization. Instead, there will be ten “parts” and each will have an assortment of 7 to 10 essays taken out of the previous “chapters”. I think it will read much better that way.

â˜¼ You can see I’ve been dinking around with the cover–only a first run, but it has potential. I just got the template for laying out the cover with bleeds and such, and the spine thickness will be determined by the page count, still to be determined, x the paper thickness.

â˜¼ I’ve gotten a quote for offset printing and can do what I want to do cost-wise with a run of only 500, which makes certain among us happy that her ANNex won’t be overrun with pallets of books like it was three years when 1000 copies of Slow Road Home showed up in our driveway.

Well, I had some more things to tell, but they’ll wait. Now, back under for another submersion in the details of this opus, magnum or otherwise.