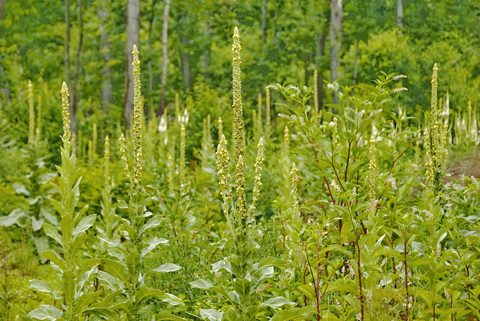 When the trees were first cut behind the Oak Grove Pavillion, it was disturbing–so much light where there had always been dense forest shade. I think I heard the pines were cut because of Southern Pine Beetle damage, the lot just behind Blue Mountain School, and you wouldn’t want dead treetops turning into widow-makers. Or whatever the term would be for a bereaved parent of a tree-toppled toddler.

But last week as we waited to hear Windfall perform at Oak Grove as part of the regular Saturday night music events there, my attention was drawn to the clearing, now into its second year. It has become a verdant field of richly diverse early successional sun-loving species whose seeds, now able to obtain warmth, light and freedom of overstory competition, have sprouted and grown into a new kind of nature: a natural meadow not seen for however many years the pines had dropped needles on the forest floor. 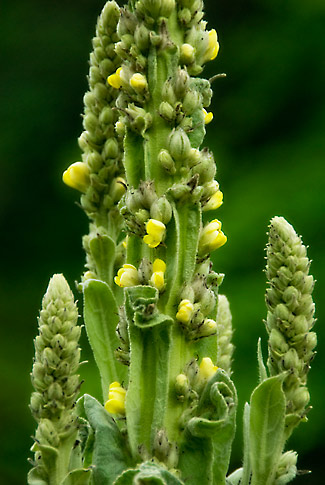 By the time my return trip from town carried me intentionally past this new meadow with my camera, it was early afternoon. While the morning had been perfect for this kind of photography, by the time I reached the site, the sun had burned off the early clouds, and worse, there was now a gentle breeze–good on the one hand because the temperature was over 80, but bad in the sense that many of the plants I’d want closeups of were of the tall and spindly variety, and the least wind set them swaying in and out of focus.

In this not so interesting overview shot, the dominant plant is our old friend, Mountain Toilet Paper, Common Mullein, or we had a new anatomical name, remember, and you can see the erect spikes here in abundance, see image left. The red stems are of Pokeberry, and the white spikes in the background I’ll be showing in detail–Fly Poison, Amianthium muscitoxicum, a tall lily of rich open forest.

So, that in the way of explaining the WHERE of a half dozen bug-and-blossom shots I’ll show you this week. And I hope to go back to the spot every couple of weeks throughout the summer and fall and see what species achieve “aspect dominance” as the earlier bloomers die back, and things like the fall asters now only inconspicuously in leaf begin to strut their stuff.

3 thoughts on “Let The Sunshine In”