After seeing numerous patients over the years with plantar fascitis, I am now the proud owner of a foot so afflicted. I’ve only just now concluded that this explains my symptoms over the past few months, and only wish I’d discovered that cause sooner.

It began months ago, noticed when I first got out of bed: the sensation of a stone bruise under my left heel. But since it was a pain that went away after a few minutes on my feet and never returned during the day, I disregarded it. 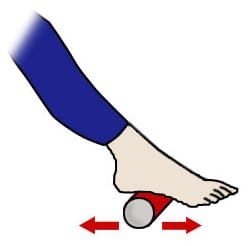 Starting about a week ago, the pain began lasting longer each day. Now, it never goes away. But I found that if I did some of the things I would have told a patient to do–don’t go without shoes, stretch and ice–the pain temporarily diminishes.

All of my symptoms are consistent with plantar fascitis–including the odd fact that more people have the problem (at least first) in the left heel. Being at home in slippers or barefoot or in my old rubber boots has not helped–none of then provide any arch support, placing more stress on the “suspension system” of the foot. Hindsight: sheesh!

So. As a (retired) physical therapist, I know what to do. And I’ll do those things for six weeks, and reassess before paying ridiculous sums of money to have someone else tell me what I have and what to do about it. I’ll let you know how that works out.