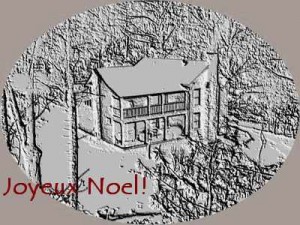 I’ll print it here on Thursday, after it has gone to press (Floyd Press and Roanoke Star Sentinel) but seeing as how I recorded it the other day to “hear” stumbling places that I would silently read past, I thought I’d share it for the couple who might want to listen instead of read. (Sorry about the tick-tick-tick of the wood stove in the background.)

I had planned (but this has not been seven days where planning has gone according to, well, plan) to add to it some musical bullets, leading in and out of the piece. My intention (and you’ll understand why this choice after hearing or reading it) was to overlay the most holy and the most unholy of Christmas music–maybe start with O Come Immanuel and fade in Santa Baby and I want a Hippopotamus for Christmas. Never got it done. So just imagine.

The essay is titled Headline: Christmas Stolen. Grinch Exonerated. Here’s the link to the file; it should open and play.