Sometimes my imagination stumbles all over itself, and a little science goes far beyond the bo 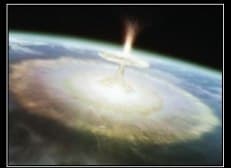 unds of the known into the terrific imagined. I had such an epiphany of remote possibility six weeks ago: that the dome of gas in the gulf was a massive balloon under pressure.

We know what happens when you prick very large balloon with a very small pin.

BP’s drill (and the wells being drilled to fix that one) are the pins. What if, all of a sudden, the incredible pressures forcing millions of barrels of oil–and far more methane than had been expected–were released in one cataclysmic explosion?

Impossible? Apparently, it has happened before.

“The consequences of a methane-driven oceanic eruption for marine and terrestrial life are likely to be catastrophic. Figuratively speaking, the erupting region “boils over,” ejecting a large amount of methane and other gases (e.g., CO2, H2S) into the atmosphere, and flooding large areas of land. Whereas pure methane is lighter than air, methane loaded with water droplets is much heavier, and thus spreads over the land, mixing with air in the process (and losing water as rain). The air-methane mixture is explosive at methane concentrations between 5% and 15%; as such mixtures form in different locations near the ground and are ignited by lightning, explosions and conflagrations destroy most of the terrestrial life, and also produce great amounts of smoke and of carbon dioxide…”

Unthinkable? Maybe we should think BEFORE our unmitigated arrogance and greed sends us into places we have no business until we know far more about the consequences. Maybe we get another chance.

Or maybe Deepwater is only a most-terrible-in-human-history environmental disaster and not the end of an epoch after all–this time.