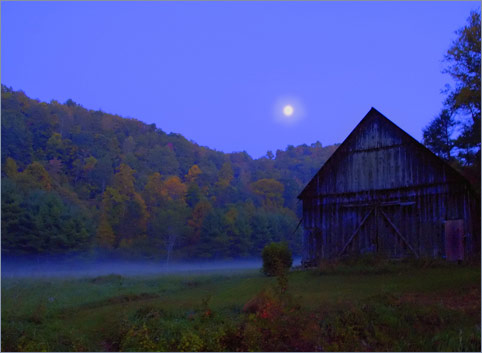 I had to search Fragments to see if I’d really done more than mentioned this before, and nope, I’d only mentioned it back in May. I did send a link to it in an email yesterday to those I thought might help with the note card selections. So I might as well pass it along to you, too, even though the link has been lurking on the sidebar now for a couple of weeks.

This rather involved project came about, I suppose you could say, as a happy combination of obligation and desire: back in the spring, for a civic organization in Roanoke in October I offered to present a program that I had not yet created. This self-inflicted obligation gave me the motivation I needed to make it happen. (Sometimes I offer myself a carrot–like the new MAC for saving money–and sometimes, the stick!)

What has come from this auto-assignment is a fifteen minute digital images (I hope they are moving pictures!) plus narration of three essays: Where I am Married, Calling Them by Name (both in Slow Road Home) and Child’s Play (about “nature deficit disorder”.) They are held together by the common thread of relationship to nature and place.

The live presentations will be projected in Powerpoint, so while not terribly elegant, the images come across nicely and the transitions are fair. The web version you’ll see suffers in image quality and transition style, and there are only about half the images. But you’ll get the flavor of it, I trust.

But for the future as I think about doing other combined media like this, I need a way to more easily sync images, music and text. So about two weeks ago, I tinkered with Adobe Premiere Elements which I’d never really used (read: steep learning curve) and created a junior version of the program converted to an embeddable slide show. That is now up for you to view or bookmark for later.

The program is called “Our Place in the World: a Visual Essay”.

I’m hoping to find other destinations for this package, both in text, presented live, and as a portable and possibly marketable package–possibly on some future multimedia disk with book #2, a slide show, and such. So if you have any ideas along these lines, give me a holler.

NOTE: The image of the barn and pasture and moon I can safely say WILL be in the note card set, as the vast majority so far have chosen it. I hope it will print up nicely. I had a request for a print of this image some while back, and the recipient was quite pleased, so a much smaller print should hold together nicely!