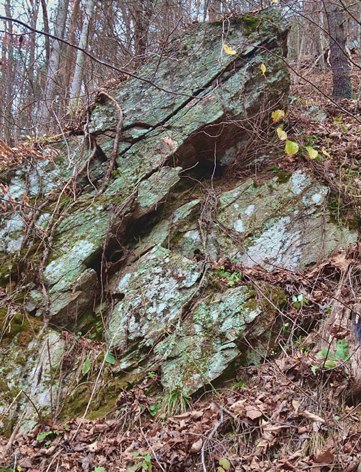 I’m looking for a better understanding of what rock type this is, and a bit about its history as it was involved in the formation of the Appalachian chain. Rock like this is stacked with intention to shore up the New Road, and forms exposed outcrops, high Â and moss-covered on both sides of our valley.

This rock is uniformly gray, and fractures roughly into flat plates, but is not quite a shale. Â This rock is a been-here, relatively speaking.

On the other hand, the rocks in the creek and forming talus slopes along the rubble-strewn flanks of the steepest reaches of Nameless Creek are altogether different in substance and story.

Countless boulders were once plowed from the creek bottom created over the ages by the raging stream that gushed with great force from the eroding rock faces of ancient Blue Ridge bedrock.

A crude rock wall follows the pasture side of Nameless Creek, each stone with a history. This rock is most certainly a come-here, carried by gravity and water from great heights at some distance. 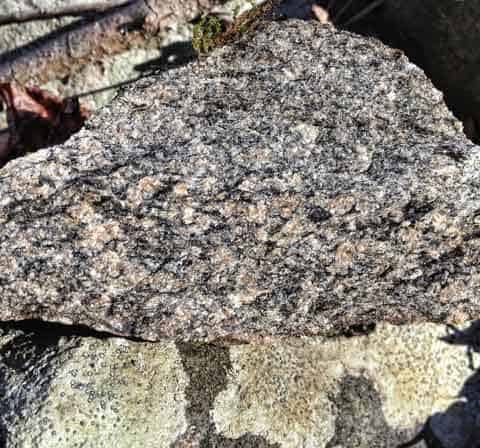 In this image, a split stone from the rock wall sits atop the lichen-covered source. Its rock type is gneiss.

You can see some evidence of Â banding of the granular, shining bits of mountain turned to grit, compacted under great force and heat into bedrock, lifted into mountains once more, tumbled into a nameless creek millions of years before language, now waiting to become beach sand once more. If we could only teach a stone to talk, eh Annie? Maybe if we spoke first…

Are you on speaking terms with the soil and rock under your feet, or in the walls of the high-rise stone of the buildings you walk past every day? This article in American Scholar might whet your appetite. Touch a rock today. Listen.