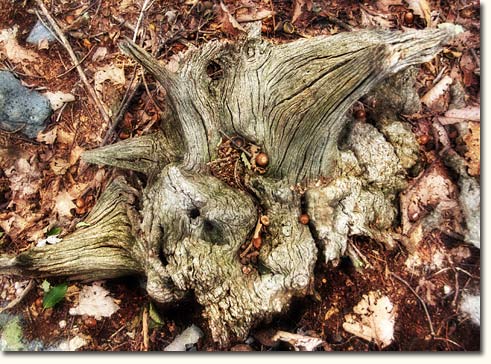 It’s going to be a good year at least for the squirrels. The oaks have weathered a difficult year, thrived even, and the forest trails pose a greater than usual risk of a twisted ankle, what with the bank to bank blanket of green, gold and black acorns. Helmet warnings perhaps should be issued to forest hikers.

We had friends over for a hike this weekend, average age: 60. Elevation change: 100 feet. Injuries sustained: one re-twisted ankle sprain that responded well to ice, elevation and chardonnay. Average years married for three couples: 38 years.

I spent more than a few hours over the past week reading some 50 letters to myself. Handwritten back before I abandoned legible penmanship, she handed them to me in a shoe box. I’d sent them from 5216 Clairmont Avenue, Birmingham, to my future wife in Biloxi in the college summers apart: 1968 and 1969.

After all these years under the same roof, I had not known before that they existed. Learning of them in a rare moment of mutual disclosure, I grasped at this chance for an archeological dig, brush and tiny light in hand. In the words and the spaces between them where there traces of foundations where roots once grew? Where below the sediment of years were our gnarled beginnings?

It is a good thing when we are young that we don’t know what the future will bring. Perhaps it never stays–the naive hope that love will consume, last, be enough; that it will weather other suitors we can never dream of so young: children, jobs, bills, old ghosts and the usual disfigurements our untested expectations inevitably suffer.

The last letter to her was scribbled in a panic: I’d just learned the path and strength of Hurricane Camille. Ann’s house on Biloxi Bay was dead center of the worst hurricane on record. The lines were out. I did not get a letter or a phone call for three weeks. I assumed my fiancee had been swept to sea. Sometimes I think I was.

Rest. Ice. Elevation. Compression. If all soft tissue injuries were only so easy to heal.