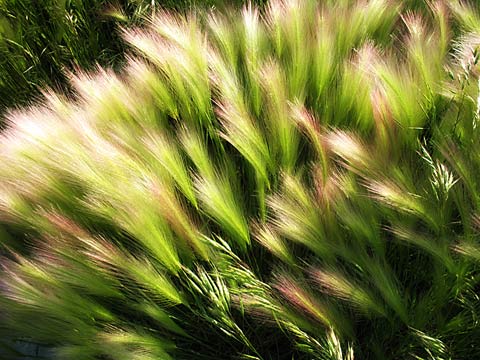 We could tell even before we landed that South Dakota was unusually green compared to the unbroken drab tan of past summer visits. They are way ahead of normal (while southwest Virginia is 25% behind.)

So there were things blooming we had never seen before, and most I’ll not get out to see, identify or photograph.

Forunately, one homeowner has landscaped his yard in what comes up naturally and I was able to find this beautiful grass we’d seen on the trip in. I went back this morning while the winds were relatively calm for a snapshot. I could tell it was a foxtail (one of the few grasses I know) and then identify it as “foxtail barley”.Â  This, from the Lewis and Clark expedition when Hordeum jubatum was first collected in the US.

“there is a species of wild rye which is now heading it rises to the hight of 18 or 20 inches, the beard is remarkably fine and soft it is a very handsome grass; the culm is jointed and is in every rispect the wild rye in minuture…” Frederick Pursh, the German botanist who annotated some of the Lewis and Clark plant specimens, wrote on the label, “ Calld the golden or Silken Rye. On the white bear Islands on the Missouri. Jul. 12th 1806.”

So this might represent the sum total of all my outdoor photography for this trip. Ah well. It’s not why we came.