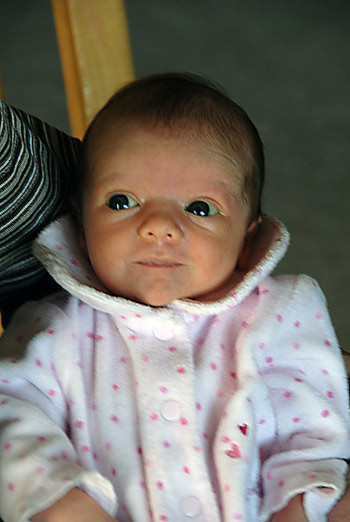 We’ve come a thousand miles to meet our second grand daughter, Taryn. We’ve held her, walked her, whistled, sung, hummed and baby-talked to her. We’ve changed her diaper, retrieved her passifier from the floor more than once, and been serenaded for a total of several hours over five days by her thrashing arms and legs and lungs exercises, especially when hungry. She was hungry only when awake.

But have we really met her? Yes, and no.

I asked Taryn’s six-year-old sister, Abby, what were her earliest memories of her grandma and grampa. She shrugged. And when did she first remember meeting Tsuga? That got a response–if not an answer.

And we have to wonder: does two-week-old Taryn see more than shapes, patterns of light and shadow? She certainly recognizes her mother’s voice, and turns her floppy disproportionately-large head to follow that sound. She stopped crying tonight when I whistled “Irish Eyes are Smiling”, became unusually alert and tuned in–at least for a stanza or two–before she tired of it and was ready for her momma to come home and bring dinner.

Next time we see her, her personhood will be strikingly evident. She’ll show signs of her ultimate adult personality, even, in six months. (I hope we see her again that soon.) And in her smile in March or April, her frowns, the way she holds her head will be early patterns she will carry with her on her wedding day, the day her first child is born.

And a year later–perhaps the next time we see her, and truly meet her–she will say words, walk, remember at least some things–like petting Tsuga for the first time. Sigh. It’s hard to compete with a warm puppy for the hearts and minds of grandchildren.

6 thoughts on “Potentials of Personhood”