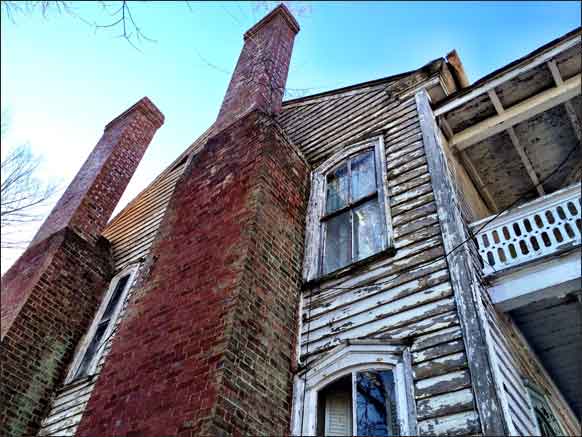 Many won’t remember the term “ugly American”–a term first used as a 50s-era photo-caption of a rum-swilling tourist in Cuba. This was a pejorative at once picked up by the rest of the world to describe mostly traveling American’s tastelessness, and lack of humility, respect and sobriety abroad. It also still refers to our ham-fisted NGO and governmental overbearing in aid and relief Â matters better addressed at street level. But that is not my point.

The phrase came to me this morning as I reflected on a photograph I took during a walk break during a short trip to the NC coast last week. You might have seen the conversation about it that came up on Facebook last week.

The short of it is that this fine old Revolutionary War era inn that we walked past on a side street of Hillsborough NC was slated for “demolition by neglect”. We were appalled. There may still be hope for the old place. Peeking in the front glass you can see woodwork and details it would be sad to send to the landfill.

You can read more about the Colonial Inn here, and a short local TV news story about it here.

The potential, if not yet inevitable, loss of this old historical structure is a symptom of a cultural impoverishment that is happening daily in this country–that has been happening since I was born, but at an increasing rate as the old structures decay and the economy continues its race to the bottom.

Ours is not a universal attitude to things that are old. Not every nation routinely tears down the structures that hold their collective identity and replace it in two weeks with a styrofoam and stucco PaunchBurger.

So I’m wondering why Americans place so little value in the non-ugly. Why are we so cavalier about the loss of our community memory and story?

It seems to be otherwise in much of Europe–I say having seen little of it myself. Edinburgh would be my poster-child. Click the larger image of the castle area. (There are windmills in the far distance.) How are the decisions made and the resources collected to sustain that which is precious (or should be) in an English or German community?

Maybe some of the ugly in America comes from our lack of regard for history, our tolerance if not preference for facade (pop culture personal and architectural skin-deep tinsel) and our indifference to place and a pervasive rootlessness that goes with our Westward Ho zeitgeist and impatience with the familiar.

So sadly, in the end, there is less and less HERE here.