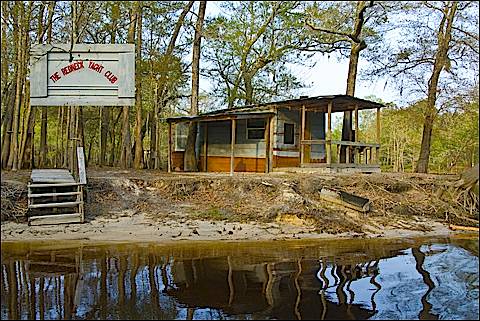 Â Found, from our early April trip to South Carolina. The body of water, the Waccamaw River that begins in the Carolina Bay lake by the same name, just over the border into North Carolina.

It is a “blackwater” river, so called because with the warm clime and the abundance of organic matter in the water, rivers and streams become a kind of tea, of tannins chiefly, with a characteristic dark clarity so unlike the opaque clay-soil red rivers of central Alabama where I grew up, or the clear, cold waters of Southwest Virginia where we live now.

And here, on the other side of the “tracks” from the million dollar homes of the well-off, this somewhat less ostentatious self-proclaimed “yacht club” where you can be sure the beer is cold and cheap–and I’m guessing a cold one for breakfast down there would sound about right in this record-breaking June heat.