Well, you know. Those things we’re not supposed to let bite us in the night? Chances are growing they will do just that. 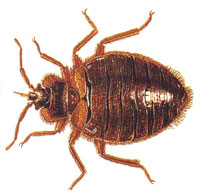 “Bedbugs are just going ballistic everywhere,” said Michael Potter, a professor of entomology at the University of Kentucky. “It is going to really rock this country. I’m not trying to sound sensationalist.”

“Bedbugs hitchhike on humans or in luggage and burrow into bedding, books, sofas and just about any cozy place, even picture frames. Once they establish squatter’s rights, evicting them isn’t easy. Or cheap. Casting them out of the average house in Southern California can cost thousands of dollars and require multiple visits.”

“Western Exterminator Co., which serves California, reported a 240% increase in bedbug work from 2000 to 2006. Isotech Pest Management Inc. in Pomona is conducting about 1,000 inspections a month — 700% more than last year.”

“A bedbug is really a wonderful survivor” that can persevere for as long as 18 months without nourishment, said entomologist Frank Meek, a technical director for Orkin. “They can hide and live a long time.”

So what’s the take home: don’t take them home. Especially be careful when spending the night in motels–even the posher ones–to check first under the mattress and sheets, looking for active insects or their droppings, or tiny blood stains from the previous night’s motel guests. A

And tell your kids at college that, while those curbside freebie beds and sofas seem like a good deal, they might NOT be if they introduce Cimex lectularius to their apartment, your house, or both.

There is the story of the woman who got up in the middle of the night, turned on the bathroom light, and discovered to her horror that she was covered in bedbugs. Their bites are painless. They don’t transmit disease. But doesn’t it just make you itch and squirm to think of being a meal for dark-feeding parasites right in your own bed!

And the worst news: pesticide-exposed bedbugs (from motels and such) are already showing resistance. Creepy.