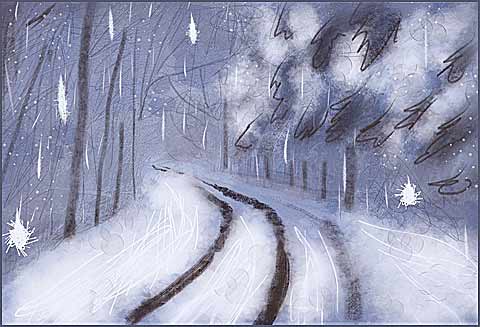 Amazing! We have a soft, lovely inch of snow (over some freezing rain) AND…wife does NOT have to travel in it! This never happens! I’m much happier to see her march casually up the steps to check her email than to see her headlights disappear into the snowy darkness for an hour-plus out of touch, on the uncertain roads to work.

OTOH, those in the northeast are really in a dilemma, with just a little snow for the morning commute, and a blizzard almost certain for the unlikely drive home this afternoon. This could be another Snowmaggedon, folks.

After almost getting caught on the interstate in a freezing rain a few weeks ago, I feel for those who at some point despair of going farther, then have the two bad choices: either stay in their cars, or abandon them to wander in a blizzard to someplace else.

But take heart: we are only three weeks away from the end of “meteorological winter.” There’s a reason why when March arrives, we feel like, for the most part, we’ve made it through another winter, even though astronomically there are three more weeks of it to come.

The stacked and covered wood we have have left plus the two cords we bought in December will give us a good start for next winter. And nearby there is a cord or two of “windfall”–mostly, and for years to come, fallen hemlocks succumbed to the Hemlock Wooly Adelgid. It’s not great wood for btu’s, but as the old timers say, the best wood to burn is the wood you can get.

Caption: Snowy Winter Road, and I guess those would be Wife’s tracks disappearing into the distance. Just not today. Image created by the blogger using ProCreate for iPad.

6 thoughts on “Snow Use Complaining”