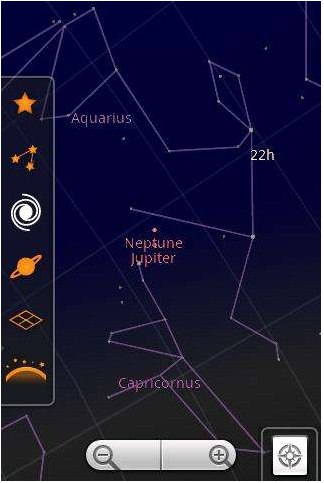 I was out there this morning at 4 a.m. and every star in the sky was visible, but few of them were visible in the sky beyond the fog that clouded all but the brightest points of light overhead.

The stars I was seeing in such exquisite detail were in my hand. Google Sky Map, even as the fog rolled in (and became complete by dawn), was stunning on the Droid. Bear with me, and I’ll get over my fan-boy fawning soon, but this app is incredible.

With every increment of movement of the screen along the horizon and every degree of elevation above it, moving smoothly into place–the named constellations, planets and stars (by name or catalog number) OR you can type in a planet or constellation and it will direct you left-right or up-down to find it in the nighttime sky beside the screen of the phone. I put it on Night View so the lines and dots of the constellations would be in red, preserving night vision.

The hope of witnessing the Leonid Meteor Shower was what prompted me to be warmly swaddled and standing in the middle of the road in the dark at ten minutes after four this morning. A single silent blue-white stroke scrawled past as I held the small screen up to the sky, feeling a little like Spock with his Tricorder.

“D R O I D” it droned mechanically in the dark with a new notice from StarFleet, the only other sound the rush of the creek, a turbulence I imagined as the warp speed overdrive turbos kicking in about the time the coffee would be ready inside the Holodeck.