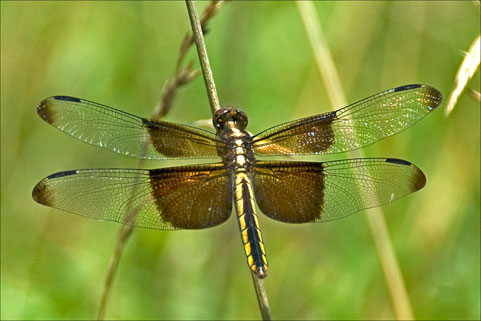 Re-published from one year ago today (image from this week) with a hope to see a repeat performance of this dragonfly spectacle. Look up!

The dog and I made one last trip down to the creek at dusk, just to stand and watch the reflection of last light on what water thankfully still flows in Goose Creek. (Actually, Tsuga was less reflective and chased a Leopard Frog along the weedy banks.)

Wet with cold creek water, the energized dog needed to run off his invigoration, so we tossed the stick a bit for him to run in his usual path between the shed and the rock wall just off the back porch. I think it was in throwing the stick far up hill that I had occasion to look up. I was stunned. I lay down on the stone pavers to watch.

The column of air above the house was teeming with them—a hundred I could see, I guessed, and probably many times that beyond the visible limit just before dark.

Coursing, dipping, hovering, giving chase, a silent armada of dragonflies made a meal overhead. I’ve never seen anything like it with the exception of the X-wing fighter scene on Star Wars, or an old WWII aerial dogfight.

The object of their warfare was too small for me to see, but with their helmeted-eye 360 degree vision, they spun quickly in mid-air to snag their prey with great precision and artistry in their dance. Into their scooping-snapping mouth-parts: a meal of gnats. We’ve seen the small black dots of them ganging up on our screens the past few days.

It’s not unreasonable to think there were a thousand in this particular squadron, seen and unseen. I tried to imagine the work they provided, the “environmental service” of controlling our insect population over the waters of Goose Creek where they were born. This explains why we have no mosquitoes or black flies here. But this is not the full picture of this insectivorous service. And what keeps the dragonflies from eating themselves out of house and home?

Are there predators that feed on this wealth of X-winged protein above me? Do the nighthawks we sometimes see—a fairly large bird—waste their time with gnats, or do they feed a little higher on the chain, I wondered.

And is it possible for a bat to bring down a dragonfly with a wingspan large as its own? No sooner had I had this thought than a small umbrella began a lilting, rotating, leaf-twirl in my direction—a dark winged shape against the darkening sky. At last its vertical fall ended with a short swoop into the maple branches thirty feet up. It was an encumbered bat, and I believe—or imagine—that its flight was impaired because it struggled with a large dragonfly. It was too dark to tell for sure.

1 thought on “Things in Heaven and on Earth”