↓ Skip to Main Content
Home › Uncategorized › This Land is…

fred Posted on February 29, 2008 Posted in Uncategorized No Comments 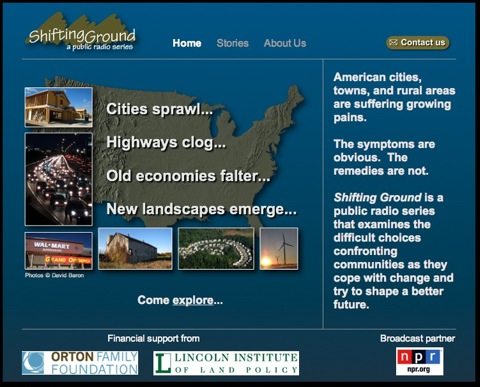 The series, called Shifting Ground was produced by David Baron, an award-winning author and journalist who has worked in public radio for more than 20 years, previously as science and environment correspondent for NPR, and science editor for the Public Radio International-BBC program “The World.”

The Lincoln Institute of Land Policy supported Baron’s work, and the series was acquired and edited by NPR. After the first installment airing Thursday, February 28 on All Things Considered, the reports will air as an occasional series in the weeks and months ahead. They will be archived and available on the website.

Baron said he hopes the series will stand out not just in substance, but in style. “Stories about land use are often technical and abstract. Zoning, setbacks, comprehensive plans — just mention the terms, and eyes glaze over,” he said. “We decided the key would be storytelling, and though the stories are place-specific, they touch on issues that listeners can relate to, wherever they live.”

One installment looks at conservation easements, a popular tool for protecting private land from development, by exploring the case of an easement at a Wyoming ranch put in place in 1993 and then undone years later. The story raises questions about society’s commitment to protecting land, and whether those protections should be flexible. Another story looks at a community in Nevada that is trying to save its rural character in the face of suburban growth, where the central character is a braying donkey who invites a lawsuit claiming violation of a noise ordinance. A verdict against the animal sparked a community uprising in defense of livestock ownership.