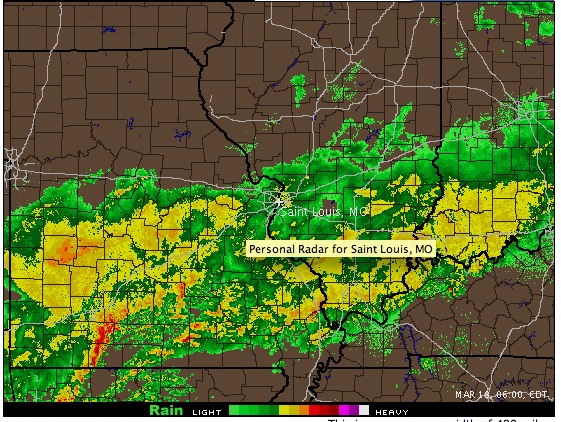 It’s great to get away. At least it’s great to think about it. But when it comes down to the grungy details of packing and unpacking, remembering and forgetting, waiting, worrying, sitting too long, gripping the steering wheel with white knuckles in traffic usually somewhat in excess of downtown Floyd’s–well, I’d just as soon stay home.

Problem is, that isn’t always so easy either when wife or kids are on the road and their line of travel and/or airport is under a tornado and flood watch. Such is the case this morning as I watch the storm track across southern Missouri, Ann and her older sister this moment (I think) setting out in the dark rainy fog for Springfield. Sometimes I think less information is preferable.

I know they haven’t been listening to NOAA radio and following the severe storm tracking that is carrying possible tornados directly into their path. Should I call them and tell them not to go? They think they’ll get Ann to the airport for an 11:00 flight way early but give her sister a chance to get back home (two hours one way) before it gets bad. I’m not so sure. Oy.

Or maybe I should call and be unconvincingly reassuring, tell her something nice to think about. I would tell her that the crocuses she planted along the walkway are in bloom–but then, they are so short-lived that by the time she gets here–ostensibly this evening before dark (though I have my doubts) –they would have bloomed and gone.

So I’ll be staying near the phone; I’ll be watching arrival and departure schedules as they morph over the day; and I’ll be surprised if she sleeps in her own bed tonight. She’ll be panicked about missing work tomorrow more than anything else. Working life will go on without her. And Tsuga and I will eat chili. Again.