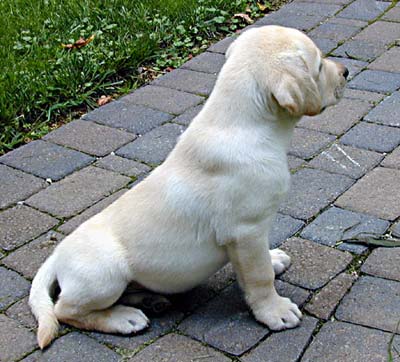 We said when we’d gotten past the very hard thing of putting Buster down in July of 2003 that we would not have another dog. It was just too hard to lose them–especially that way.

And three weeks later, Tsuga was born; I knew if we went and looked at the pups we’d bring one home. And when he was 7 weeks old–on August 17, 2003–we brought him home. Early on, we considered taking him back. He was a belligerent terror. I wrote about our growing relationship that month in a series I thought might turn into Marley and Me of Goose Creek. I called the posts “Alpha Male” even while I worked hard to take over that position.

Tsuga (named for the dying Hemlock trees) has turned out to be a very gentle dog, after a snarly beginning. And, in spite our early concerns he was deformed, he’s a nicely built dog as well.

You can see why we were concerned. His front two-thirds grew faster than his caboose. If you cover up all but the hind quarters, it looks like a tiny dog with very big feet. He did finally grow into his chest, and at 80 pounds (that’s a lot of kibble) he is strong and agile.

Now, he’s four years, plus a couple of months. Buster died at four and a half. We think about that when we take stock of how much a part of our life this pup has become, and hope for him a long and happy life on Goose Creek.

I’ll probably post another spot or two on the dog this week, being his anniversary and all (and per the stipulations of the contract from his agent.)